Yulang Mirage is the champion gladiator of the Leazas Castle Coliseum.

Yulang is well-known throughout the nation as an undefeated warrior and a remarkable beauty, which make her very popular as a gladiator. Her reputation is so great that she has been hired by the royal family several times to accomplish difficult mercenary work.

Sometime prior to the events of the Rance Series, Yulang, alongside the then-current Hero of the System Arios Theoman, was hired by the Leazas royal family to destroy a group of slave traders that had been kidnapping the daughters of noble families. While the two succeeded in accomplishing the task, the traders had already sold off several of the girls into sexual slavery before they encountered them, most notably the Zeth noble Sill Plain, who was purchased by the warrior Rance at the cost of his life savings.

During the events of Rance 01, Rance decided to defeat Yulan after she agreed to let the winner do whatever they wanted with her. While Rance won the battle, the excitement of being able to fight an opponent as strong as Rance prevented Yulang from becoming upset over her loss, allowing her to lend him both her sword and body without any hesitation.

Jean Gyanban attempt to rape her with the help of two thugs. If Rance paid Louis, he will kill the goons and save Yulang. If he didn't, he and Menad arrive to kill Jean and his men, but fail to stop Yulang from being raped.

During the events of Rance 03, Yulang aided the Leazas Liberation Army in the 7th Helman-Leazas War, using her impressive swordsmanship to fight off the invading Helman soldiers at the capital. However, she eventually encountered Minerva Margaret who defeated her, along with the other coliseum fighters, with ease and used them as bait to ambush their allies. Rance and his party later managed to defeat Minerva and free Yulang, who joined the group to assist in the final charge to retake Leazas Castle.

After a long absence, Yulang appeared again during the events of Rance Quest, where, eager to see how his skills had developed since she last saw them, she offered to join Rance in his adventures. While Rance was initially excited to have an experienced warrior like Yulang on his side, as the Morurun Curse which he was afflicted with prevented him from sleeping with anyone under Level 35, he was disheartened to learn that she possessed a Level Cap of only 27 and was unable to have sex with him as a result. During this time, Yulang revealed that she had attempted to replicate Rance's signature move the Rance Attack and, though unable to fully do so, developed her own variation of it known as the Lemon Attack in the process. During the game's epilogue, Yulang is stated to eventually finally give in to her friend Leila Grecni's requests and become a member of the Leazas Royal Guard, where she is said to serve as one of its strongest members.

Yulang is briefly mentioned in the game Toushin Toshi, where she is stated to be a participant in the Toushin Tournament. She is noted to be rivals with another female warrior participant known as Morris. Yulang manages to make it to the quarterfinals of the tournament before losing to Morris after a heated battle.

Yulang is an outstandingly attractive woman with a body that is both fit and well-toned, while still being feminine and sensual. She has short blue-green hair and wears revealing golden armor with a cape. Her armor of choice is similar in appearance to the uniform of the Leazas Royal Guard, although with some notable differences. This resemblance is noted in-universe, and is suggested to be the result of Yulang subconsciously modeling it after the Royal Guard uniform.

As the champion of the Leazas Coliseum, Yulang is very confident and proud of her strength. She is a natural warrior who is always in search of strong opponents that can put her skills to the test. She is very fond of betting on her victories due to the additional thrill that gambling adds to combat, to the point of agreeing to bets even when she has nothing to win from them in the process. She takes her rare losses in stride and uses them as learning opportunities to improve her skills, allowing her to become even stronger. Despite her confident nature, she is still willing to work alongside other warriors to accomplish difficult tasks, and enjoys observing their strength when doing so.

In contrast to her battle-loving personality, Yulang is still a surprisingly ordinary woman when outside of the Coliseum, and has a fairly casual-yet-respectful and polite tone when speaking to others. She is attracted to strong men, and allowed Rance to sleep with her after he defeated her in battle, although she admitted to him that she lacked experience in bed and was shown to be somewhat nervous about the occasion.

She is an old acquaintance of the Captain of the Leazas Royal Guard Leila Grecni, and the two share a friendly rivalry. Leila has asked Yulang to join the Royal Guard multiple times, though she has always refused, stating that she prefers the unpredictable life of a gladiator. Yulang is said to have joined the Royal Guard sometime after the events of the series, showing that she eventually agreed to Leila's requests.

As the current champion of the Leazas Coliseum, Yulang is a powerful warrior who possesses both strong attacks and fast movement speed. She possesses an above average level cap of 27, which she has reached. While not a particularly high cap, especially when compared to other elite warriors, Yulang's natural strength and skill allow her to be a difficult opponent nonetheless. Prior to encountering Rance, she remained undefeated within the coliseum, further cementing her reputation as an excellent fighter.

Yulang is in possession of a unique skill known as the Phantasm Sword, which allows her to create an illusion of herself to act as a decoy to her opponent while she attacks them from the air with a powerful downwards thrust. It is through this technique that she gained her reputation as a powerful warrior.

Yulang's armor features a strange rocket-like attachment that can be used to propel her forwards at extremely fast speeds. She is incredibly proficient at using it, and can perform intricate and elaborate tricks while doing so to confuse and surprise her opponents. While not quite capable of flight, Yulang can launch herself into the air when using it, making it critical to performing the Phantasm Sword technique.

In combat, Yulang wields a rare Ghost Buster sword that is capable of cutting the immaterial beings like Ghosts, along with being generally a very strong blade.

Yulang's appearance in the original Rance I.

Yulang fighting in the Rance 01 OVA.

Yulang's portrait in her gladiator armor in Rance 01 and Rance 03. 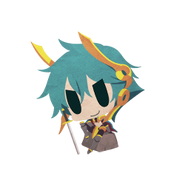 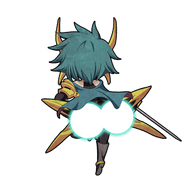 Yulang in dungeons in Rance 03.

Yulang in Battle in Rance 03.