A ninja from JAPAN who entered the Combat God Tournament in Toushin Toshi under the orders of the shogun in JAPAN to investigate the tournament. She can create multiple illusions of herself, rendering her virtually unable to be hit. Her weakness is her fear of frogs.

In her very first match her opponent was Rance. While she was no match against the swordsman, when Rance found out Yayoi is female, he tried to assault her before the match was settled, thereby getting himself disqualified.

In the semi-finals round she her opponent was Custom. Before their battle, Yayoi made a deal with Custom to rescue her servant, Yukikaze, who had become captured in the Trial Dungeon. Unfortunately, this became her undoing, as Yukikaze leaked the secret of Yayoi's phobia, and Custom exploited Yayoi's fear of frogs and easily defeated her. Nevertheless, the two became friends.

After losing in the tournament, she was held in Yora's domain to be consumed later. When Yora went berserk, she escaped and helped Custom defeat Yora. 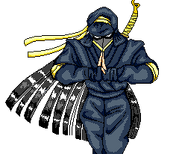