Yamanaka Kojika is the former chief retainer of the Amako family, an unfortunate clan that perished during the Warring States Period in a war against the Mouri House. Kojika had a deep love and allegiance towards her lord, and devoted her life to serving the Amako. However when Mouri Motonari took over his house, he began annihilating all his opponents and expanding his territory thanks to his overwhelming force, destroying other houses and taking over their territories. Soon after the complete annihilation of her beloved house and the death of her lord, Kojika vowed to the sky that she would one day restore the Amako and get revenge from Motonari, saying "I will restore the Amako family, and I shall take any burden for that. Give me seven misfortunes and eight agonies.". A voice responded, stating that her wish would be granted. This came as a strong source of inspiration, believing it to be a sign that she will eventually succeed on her mission.

While most of the Amako Family was murdered in the incident with Mouri, she was able to gather a small number of people loyal to the Amako that assist her, who willingly became the subordinates of the former Chief retainer of the Amako. At some point however, her brother tripped over a rock and lost his life. She was later betrayed by one of her most trusted subordinates, a man named Kobayashi, who tricked her and raped her. Despite these events, she continued to carry on her mission and managed to save the heir Jirota Amako, who would succeed the House when restored. Unfortunately, he would die of pneumonia soon after, leaving her group hopeless without a legitimate successor.

During the events of Sengoku Rance, she would make sporadic appearances over the events of the game, chronicling her travels. Kojika begins by meeting with several lords looking for their assistance in a war against the Mouri House. She will first request the Ashikaga House for help, but as their Lord is a selfish man and is far from concerned about her problems, she's kicked out immediately. She then tries to meet with the Ninja King Inukai, the leader of the Iga House, and uses as little money she managed to gather to hire a man that promised to take her to meet up with the Ninja King. Unfortunately, her group found themselves fooled as the man ran away with their money and abandoned them on a muddy swamp. Then, she tried her luck with the Tenshi Sect and managed to contact with its head Seigan. He showed admiration and respect for her resolution but turned down her request because the Tenshi Sect was at the time facing a war with the Oda House, and couldn't handle a war with the Mouri as well. In low-spirits she left the place but was greeted by a man who claimed Seigan wanted to meet with her in a secret location alone because on their recent meeting there were people that could be spying on them, suggesting that he intended to assist her. Her retainers were suspicious, but she accepted the proposal, stating that they need to take any opportunity they see. Hours passed and Kojika returned to her subordinates sobbing, revealing that the man tricked her and raped her, but she was still resolved to restore the Amako. She then tried to ask the Oda for help, but when she met with its leader Rance she was kicked out immediately without even listening to what she had to say, as the lord stated that "he doesn't care about kids".

After all these failed attempts, she discarded the idea of asking for assistance from other Houses. Instead, she and her small group took jobs to make some money to hire mercenaries to fight against Mouri. They made 1000 GOLD in a short period of time, which boosted their morale, but it was soon lost after Pluepet appeared demanding her to pay a debt she had, a debt of 10 G from a decade ago that increased to 1000 due to interests. Some time later, she decides to ambush Mouri with only her 9 subordinates, hoping that they would be able to take one underguarded town and increase their forces from there. She leads the charge towards the base stationed in the place, killing the guards and storming the place. They fight bravely but they immediately found themselves surrounded and overwhelmed by the far more numerous troops. Her subordinates decide to trade their lives to save Kojika's and willingly throw themselves towards the enemy to earn her some time. They're killed on the spot and they can't even get her any time to escape and she's captured as she was wailing over her subordinates' deaths. After captured, the Mouri troops thoroughly violated her in group for several hours, before they eventually got bored and dumped her away.

After the death of her loyal companions that had supported her up until now, Kojika was depressed but still unwavering, and made a humble market on the street selling deer biscuits, spending some time just like that barely making a living while saving money that will be used to restore her House in the future. Eventually, she's found and noticed by the Hanny Kondou H. Isami, who's extraordinary surprised by her as he finds her "Moe!". Followed by a large group of Hannies, he offers his help and they decide to attack a territory where supposedly Motonari's oldest daughter, Mouri Teru, is residing with only a small number of guards. The plan is to defeat the guards and take her hostage, and they immediately go for it. Once there Kojika is surprised as she doesn't find Teru, but Mouri Motonari himself, surrounded by many troops. She sees this as a great opportunity to take his head and is confident that she will succeed as she has a large group of Hannies on her side, but as she turns around she finds herself alone because the Hannies already abandoned her. She tries to attack Motonari regardless but she's instantaneously defeated, and the Hannies observe from the distance. Kondou is overjoyed by the scenario, claiming that it is "Moe" and that "girls with glasses go well with tragedy". Kojika is stripped, tied up to a tree and violated by Mouri's men as the Hannies happily watch her torment.

Later on, Kojika will start working on a local tea shop to make some money, where she overhears that the Oda House is at war with Mouri and apparently have the upperhand. If Rance doesn't unlift Motonari's curse, she will eventually hear that the Oda managed to corner him, and she will immediately head to the battle to assist them hoping that she will finally be able to take his head. Once she gets there, she finds that the battle has already ended, with Motonari finally having been put to rest by Rance. The Oda are celebrating for their victory and holding a party drinking, with even Rance being completely drunk. She asks Rance about what happened and is overwhelmed by happiness after seeing that the Mouri House has finally been defeated, and a numb Rance demands a reward and has sex with her against her will for the night. The following morning, when Rance is back to his senses, he doesn't remember anything and kicks her out. Canonically, Rance did unlift Motonari's curse and recruited him into the Oda Army, which means he never met Kojika any further. Regardless of Motonari's fate, after the fall of the Mouri House, she will continue working to fund the restoration of the Amako. She makes a small appearance in Rance Quest, where she's seen working as a local guide on a snowy mountain, and she's hired by Rance to help him get to the location where Uesugi Kenshin was training at the time.

Kojika is noted for being extremely small, standing at only 122 cm, and she's frequently mistaken for a kid despite being on her early-twenties already. Strangers often deem her as a child, which irritates her. She's self-aware and lacks any confidence in her looks, describing her small size as a "sensitive subject" for her. Her attire doesn't help however, as she dresses in what appears to be a school uniform with a blue skirt. She has a short blue hair that leaves her big forehead exposed, and wears glasses as well. She's always seen carrying a katana, one of her most valuable belongings.

She's an unbelievably determined person, capable of going through countless hardships in order to accomplish her goals and never backing down. She's surprisingly optimistic, and is very hard to unmotivate her even when she's depressed. She believes that great things can be accomplished by a combination of smaller things, and never loses hope for a brighter future. She's extraordinarily loyal to her former lord, and seeks to avenge him and restore her family more than anything. She's very honest and with a great sense of responsability, but she also tends to think that others are the same, making her a gullible and naive person that is frequently tricked by those around her. She's strong-willed, but extremely unlucky. No matter where she is, trouble and misfortune gravitate towards her. Her subordinates state that if she goes to a picnic, a thunderstorm would fall every time. The food she picks has always gone bad and she often gets food poisoning. Overall, no matter what she does or where she is, she's always experiencing misfortune as if the universe was determined to make life hard for her. This never discourages her however, and she's usually in high spirits. Her misfortune makes her largely incompetent, but she's very respected and admired by her subordinates due to her perseverance.

She travelled with 9 very loyal subordinates, who were willing to trade their lives for her. They all put up with the constant humilliation and disgraces that fell upon them during their travels and were also determined to restore the Amako family, although they were far more hopeless about their prospects to succeed. She was particularly close to one named Kawagishi, who would serve as her main retainer. When he perished during their futile ambush to Mouri's forces, Kojika was enraged and saddened, showcasing the value she held for him. Almost every time she appears she's seen eating deer biscuits. She isn't particularly fond of their flavour, but they are extremely cheap. She's come to somewhat rely on deer biscuits as a source of encouragements, as she immediately eats them to cheer up when she's upset or after misfortune occurred to her again.

A moderately skilled individual, Kojika is a competent fighter that engages in battle with ferocity and confidence. She battles by wielding a sword, which she's quite proficient with thanks to a Sword Combat Lv1 skill. She fights with no hesitation or fear, positive that she will come out on top, and her strength is above that of an average warrior as she was able to kill some of Mouri's soldiers in battle. She also has a surprisingly high Level Cap of 45, but because of bad luck and her current state of life, her current level stands at only 11. Additionally, she holds some level of aptitude for the Yin Yang arts, allowing her to use some of its basic spells such as form barriers or attack the enemy with shikigamis.

Her most notable skill is her Misfortune Lv2, an incredibly rare ability. As a Lv2, she's an astounding individual capable of absurd feats of misfortune. Despite being a reasonably skilled individual her luck is so terrible that she's largely incapable of succeeding at anything on her own, as circumstances will always play against her no matter how hard she tries. 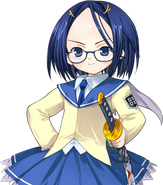