AliceSoftWiki
Register
Don't have an account?
Sign In
Advertisement
in: Articles with Major Spoilers, Characters, Female characters,
and 7 more

Yamamoto Isoroku is the princess and the only survivor of the fallen Yamamoto House. She is loyal, strong-willed, and dedicated woman, very serious with her duties and with great courage. She appears to be very knowledgeable in archery and is one of the best archers throughout JAPAN. She wishes to revive her destroyed family, which is the main plot of her own Route in Sengoku Rance.

During the events of Sengoku Rance, she makes appearance initially as a commander of the Ashikaga House. In order to save Tarou Yamamoto, her brother whom has been taken hostage by Ashikaga Choushin during the extermination of Yamamoto clan, Isoroku must work for the Ashikaga House that was responsible for the destruction of her family. During war with the Oda House, she attempts to assassinate the leader of the opposing army, Rance, by sniping him from afar, but she missed the shot after Rance luckily sneezed right at the time when the arrow would have pierced his head. She's accompanied by many warriors loyal to the Yamamoto House, but they all give their lives so that she can escape with her life after losing a battle against the Oda Army.

Later on, it is possible to capture her either in battle or after the fall of Ashikaga House. Not long after she joins Oda's army following Ashikaga House's defeat, she will go to the village that her brother has been taken hostage to with Rance. Unfortunately, someone informed her that Tarou had died a year ago, much to her grief and despair. Rance tried to cheer her up by suggesting her an alternative for her family to stay alive, it is for her to give birth so the bloodline will continue, and eventually manages to convince her that he's the ideal man and that she would give birth to a magnificent man if he's the father. In canon, she gave birth to Rance's son and heir to the Yamamoto House, Rangi Yamamoto. Currently, her son is developing as a healthy and happy child and is, more or less, a 1 year old baby.

After the 2nd Dark Lord war began, she moved with Rangi into Rance Castle. In one event, she bonds with Feliss and Pastel due to being the mothers of Rance's children.

Isoroku is a very strong-willed and competent woman. She was heavily underestimated and discriminated for her gender in the Ashikaga House, since it's a very machist house were the woman's position is inferior to men's and they are never sent to the battlefield, seen as nothing but house-keepers. She still prove strong and endured any shame and mistreat she would suffer in order to protect the Yamamoto House's lineage.

She's very determined and loyal, and would never betray an ally or a friend. She's willing to go through any means necessary to be able to give birth to a child to restore her clan, even if she has to marry an abusive man she doesn't like or know. She's extremely faithful as well, since after sleeping with Rance, she would refuse to have sex with any other man, even though they weren't romantically involved, something that comes as unsurprising to people like Suzume, who claims that "she's just that type of girl".

She's been described to as a Yamato nadeshiko, a JAPANese term for the personification of an idealized JAPANese woman, often used referring to a girl or shy young woman. She's a very traditional and pure JAPANese beauty. She doesn't acknowledge it, but she's actually more feminine and ladylike than most female characters. Despite this traits, and her impressive talent as an archer, she has a very low opinion of herself. She thought that the reason there was no man that would offer to marry her was because she was ugly and unworthy of giving birth to the future head of a clan (in reality it was Rance driving off every interested man).

She's very humble, servile and has proved to be a very caring and charming person towards the people she likes and is very honest with her feelings.

Isoroku is an expert of JAPANese archery, probably the best archer in JAPAN. She has a Lv2 skill in Bow Combat and is exceptionally skilled with it, with Aristoles Calm being the only other individual to possess such skill level. She's silent, precise and deadly, capable of performing assassinations the same way Ninjas can, probably more efficiently than most ninjas.

She has a unique skill called Whirlwind Shot, which consists in a powerful, fast and precise shot that goes straight towards her opponent ignoring everything there is in between and aims to kill the commander in one clean shot in the head. Obviously this ability requires extreme precision and can sometimes fail due to the randomness of the shot that travels between hundreds of units. It's still a very powerful and deadly ability and Isoroku is the only one seen that is good enough to perform it.

Her current Level is 27 and has a Level Cap of 37, which is pretty good but she doesn't rely that much in levels anyway due to her whirlwind shot and the fact that she fights primarily with a bow from afar and not in solo combat.

For more in depth gameplay information for each game refer to: 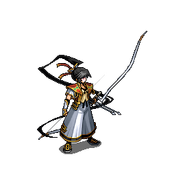 Isoroku and her son Rangi in a flashforward. 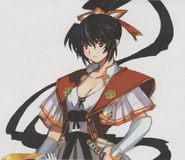 A Yamamoto Illustration from Kichikuou Rance.