AliceSoftWiki
Register
Don't have an account?
Sign In
Advertisement
in: Articles with Major Spoilers, Characters, Male characters,
and 5 more

Yamagata Masakage was the Chief Advisor to Takeda Shingen and one of the four great generals of Takeda House.

Prior to the reformation of Takeda House, Masakage was the head of the Yamagata Family, one of the four most prominent families in the territories that would go on to make up the nation. At some point, these four leaders held a meeting between each other, united by the common goal of bringing peace to the chaotic JAPAN. While all four of them excelled in different areas, they understood that, even if they were to combine their powers, the country could only be completely unified if it had a single leader to follow. This led to the quartet creating the character of Takeda Shingen, a "living god" clad in red who excelled in all areas that the people of JAPAN could look to as a leader, when in reality it was simply the four of them each taking turns in the armor to utilize their own specific talents. Due to his excellent leadership ability and talent for giving speeches, Masakage took on the role of Takeda Shingen whenever he made public appearances.

During the events of Sengoku Rance, the forces of Oda House, led by Rance, succeeded in taking Takeda's territory and destroying the nation. As Takeda Castle burned to the ground, the four generals had one final discussion about their next plan of action. While Baba Shouen believed that they should have launched one final attack on Oda in order to die in a blaze of glory, Sanada Tourin believed that they should have retreated in order to continue towards their goal of bringing peace to JAPAN. Though Masakage acknowledged that Tourin's idea was the correct one, he could not overcome his own desire to die as a warrior, and decided to fight to the death alongside Shouen, leaving the future of JAPAN in Tourin's hands while he assaulted Rance with his remaining troops, where he was ultimately killed.

On additional playthroughs, Rance can gain the option of attempting to assassinate Takeda Shingen prior to destroying Takeda House, which results in him exposing the truth about his identity and forcing the four generals to disband and ally themselves with different houses. Masakage can be fought and captured in battle during this time, allowing him to fight for Oda as a commander. After joining Oda, Masakage develops a large amount of respect in Rance's abilities, similarly to his friend Tourin, and decides to trust him with the future of JAPAN.

Masakage was a stocky, bald and middle-aged man with a large, upwards-curling mustache and a frowning, serious face. Rance frequently noted his physical resemblance to a daruma doll due to his stout body and distinct face. This resemblance was further enhanced by the dark red Takeda armor that he wore at all times.

A devoted follower of the code of Bushido, Masakage embodied the ideals of a great samurai, being both extraordinarily noble and fiercely loyal to his friends. He worried greatly about the future of JAPAN, and worked hard alongside his allies to forge a path towards a brighter future. His devotion to the way of the samurai proved to be his undoing, however, as he chose to die in a magnificent battle over living on and continuing to struggle to unify JAPAN. Unlike Shouen, however, he was more hesitant when making this decision, and admitted to Tourin that he did not believe that it was the correct one, showing that even in his final moments he still thought of his country's future.

Within the dynamic of the four generals of Takeda, he took on a sort of unofficial leadership role, with his superb negotiational skills allowing him to mediate discussions between the serious Tourin, the hotblooded Shouen and the carefree Yoshikage. In this sense, he could be considered to have been the "true" leader of Takeda, though he had no more power than his peers beyond his talent for leading people.

While he was great friends with all three of his peers, he seemed to be especially close to Tourin, looking to him as a trusted advisor when making decisions. His profound bond with Tourin was best shown during the fall of Takeda, where he entrusted him with achieving their dream of creating a peaceful, unified JAPAN. His death deeply impacted Tourin, who continues to think about his departed friends even after fulfilling their lifelong dream.

Masakage was a versatile warrior who was skilled in both swordsmanship and spear fighting. In battle, he rode a Tebasaki with a great amount of skill, allowing him to be quick and maneuverable on the battlefield. He possessed a Level Cap of 34 which, while above-average, was quite low when compared to the majority of JAPAN's national leaders, particularly his three incredibly strong friends.

Though he was somewhat unimpressive as an individual fighter, Masakage truly shone when leading an army. His leadership abilities were considered to be the best in JAPAN and some of the best in the entire Continent. Masakage was capable of bringing out the full potential of every single soldier working under him, causing them to fight with a devastating combination of strength, speed and efficiency. Additionally, he, like all of the other leaders of Takeda, was capable of performing the secret technique Fuurinkazan, which drastically increased the capabilities of his army, increasing its power even further, to a point where it was nearly invincible when encountered on the battlefield. When the four attacked their enemies, Masakage's army would always strike last, nearly guaranteeing that he would lay waste to whatever remaining resistance his opposition was putting forth.

Besides his skill as a military leader, Masakage was well-versed as a political leader as well. His talent for organization and management allowed Takeda to optimize its national power when combined with Tourin's tactical genius, and his skill at speeches was capable of inspiring an amazing amount of passion into even the most ambitionless person. 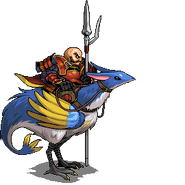 Concept artwork of Yamagata Shukei from the Sengoku Rance manual.