Wuu (called Lis in Rance III) is a young member of the incredibly rare Round One species known as Lis that became a human through the power of love. He is the fiance of Rola Indus.

Wuu and Rola began dating when he was still a Lis. Though they were very in love with each other, Rola's father did not approve of his daughter dating a monster and forbade her from seeing him. Unwilling to be separated from her love, Rola ran off with Wuu and began living with him in his house in Lis Cave just north of Rola's home town of Ice.

Outraged and believing his daughter to have been kidnapped, Rola's father sent out a petition to the Keith Guild rescue her from Wuu's clutches. The job was taken by Rance, desperate for money, who stormed Lis Cave to retrieve Rola. Unwilling to be separated from his love, Wuu first attempted to reason with Rance by describing his and Rola's circumstances, and while his explanation gained him sympathy from Sill Plain and Kanami Kentou, Rance was completely unfazed by it, forcing Wuu to fight him to protect Rola. Wuu lost the encounter and was momentarily thrown into despair over his weakness, but regained his composure after Rance told him that he could become a human and be with Rola if he became stronger. While Rance only said this to get him to go away, Wuu was incredibly inspired by this statement and immediately left on a journey to train himself to become a human.

Wuu later ran into Rance's party again while they were climbing the Hyper Building. To the group's surprise, Wuu had somehow succeeded in becoming a human and was excitedly preparing to reunite with Rola, unaware that Rance had already tricked Rola into believing an imposter was him not long before. While Rance was heavily criticized by his allies for his actions, he remained largely indifferent to the entire affair.

Wuu appeared for a final time in the epilogue, reunited with Rola, who was apologetic to him for having sex with the imposter and eager to have her revenge against Rance for tricking her. Wuu encouraged Rola to calm down, reminding her that Rance was the person that inspired him to become a human and allowed them to finally be together. Following this, the happy couple began planning their wedding.

As a member of the Round One race, Wuu was a small, round and rather adorable creature covered in white tufts of fur. He had large black eyes with distinct bright blue star-shaped pupils and a halo-like protrusion above his head. After becoming a human, Wuu took the form of an attractive young boy with white hair the same color as his fur while retaining his bright blue eyes.

Wuu is shown to be a kindhearted and friendly individual that prefers settling conflicts peacefully. When confronted by Rance over having allegedly kidnapped Rola, he attempted to talk things over before being forced to resort to violence. Compared to the short-tempered and easily angered Rola, Wuu rarely ever holds grudges and acts as a calming voice of reason to his volatile fiance. This is best shown in the couple's respective dealings with Rance, as while Rola despises him for driving them apart, Wuu respects him as the person that inspired him to improve himself, and is willing to look past his more negative qualities because of it.

One of Wuu's most defining traits is his deep love for Rola, being willing to completely change his physical form in order to be with her. He very frequently breaks into passionate speeches about the depths of his feelings for her and is easily brought to tears of joy at the mere thought of her.

Despite being a member of the notoriously weak Round One race, Wuu is actually a rather competent fighter. When forced to fight to defend Rola, he was capable of putting up a good fight against Rance, Sill and Kanami all at once. While all three were only at around level 10 or so, it is nonetheless still impressive for a member of a species known for its weakness to put up any sort of fight against three experienced warriors. It is likely that his love for Rola brought out a passion in Wuu that allowed for him to fight harder than he normally would. In combat, he fought by slashing his claws at his opponent.

As a Lis, Wuu is capable of mutating his physical form over time. It is because of this ability and his burning desire to be with Rola that he was able to become a human. As Lis are incredibly uncommon, Rance and his party were all shocked to see that he had actually succeeded in changing his form.

While it is unknown if Wuu's abilities changed at all after becoming a human, the fact that he was encountered by Rance's group in the Hyper Building, a massive tower with hundreds of floors filled with mid-level monsters, specifically having finished training himself to become a human, suggests that he remains a surprisingly strong fighter even after changing his form. 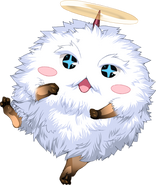