Wrench Luncheon is a shopkeeper working in a Weapon Shop in the town of Ice from the Free Cities Alliance. She was the daughter of Rachett Luncheon, the previous owner of the store, and she inherited it after he was killed by Rance and Kanami. Her father was very possessive with her, to the point of making her feel very uncomfortable about it and she claimed to have experienced sexual harassment from him. At some point prior to Rance 03, she lost her virginity to Rance after being raped by him, which instantly turned him into a despised enemy of her father. After his father knowingly fooled Rance and deliberately sold the Holy Armaments from Leazas he was desperately needing at the time, Kanami killed him off for good, leading Wrench to become the owner of the store some time after as a result.

Initially unbeknownst to Rance, she suffers of a rare dissociative identity disorder, alternating between two completely opposite personalities. One is a timid, weak minded and submissive girl, while the other shows a hussy, assertive and aggresive demeanor. What causes her personality to change is unclear but it seems to alternate every day. The first time Rance meets her, she was in her timid personality, which Rance takes advantage of by tricking her to have sex with her. The second time, she's in her aggresive personality, much to Rance's surprise. She's aware that Rance was the one that killed her father but holds no grudge towards him for it and, infact, is even grateful to him. When Rance has sex with her this time, it looks like she's the one that is raping him rather the other way around.

She also makes one last appearance during the epilogue, where Rola and Wuu are seen buying weapons for the latter on her shop, where she was mostly seen annoyed by the fact that they are invested into their conversation than buying stuff from her shop.

A slim girl with a long brown hair, Wrench's an attractive young woman with a humble appearance. She wears nothing but dark blue denim dungaree shorts, carrying no underwear below it for some reason. Her appearance makes some changes along with her personality boasting a far more loose disposition, with her hair and clothes becoming messy and tattered. Her most noteworthy and strange change is probably her eye color, which alternates between a faint-hearted light blue to an intense bloody red. Another fairly noticeable change are the shadows between her eyes she gains, giving her an even more violent and vicious appearance.

Like stated earlier, one of Wrench's most notorious traits is her split-personality disorder, an extremely unusual mental disorder that leads an individual to develop at least two distinctive identities, vastly changing the person's behavior to the point that even memory over events are splitted into the two personalities. She seems to alternate from one to the other depending on the days, rather than sporadically changing with no visible indication, possibly upon sleeping.

Her two personalities are very easily distinguishable. One is a submissive, timid and apprehensive personality that has little self-confidence and is incapable of raising her voice. The other is a brash and sassy girl, though affable and friendly with those she's fond of. Submissive Wrench seems to have been scared of her father but still showed some dejection upon his death, while aggressive Wrench was happy of "being released from her lewd father", though both end up seeing Rance as their benefactor in the end. Because of the abuse she experienced from Rance, submissive Wrench is afraid of him and tries to keep her distance from him if possible, but aggressive Wrench is very friendly and easy going with him, regularly talking to him in a casual and jovial tone. Her timid personality is a lot more reserved and polite, but somewhat of a crybaby. Her assertive side is very tough and unladylike as well, as she's shamelessly of the way her messy clothing exposes most of her skin. She's also a lot more fond of sex as well, as she enjoyed fornication with Rance to the point that she raped him instead, whereas her submissive side could do nothing but cry and wail.

Even though the full extent of Wrench's abilities remain unknown, as her Level Cap and Skill Levels have not been revealed, she has shown to be quite competent at running the store that was left to her upon her father's death, and she was able to successfully make a living out of it despite her very young age and lack of any experience in business. As she works in a Weapon Shop, she seems to be relatively knowledgeable of a wide variety weapons, and is able to sell them to adventurers and mercenaries with good results.

Also, while timid Wrench is not quite as good at dealing with people, aggressive Wrench is a skilled and assertive seller that has shown a natural and straightforward capacity to sell her products. She's seen carrying a knife, and while she's never been seen wielding it in battle, her pugnacious demeanor when in her violent personality seems to imply that she might have some affinity towards combat, though it still remains unknown how well she would fend herself in a fight. 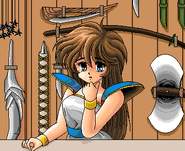 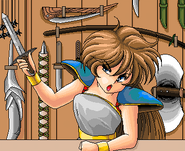