Willis Fujisaki is the personal Level God of the great adventurer and Lord of the Rance Castle, Rance, and has been acting as his personal assistant to raise his Levels over the course of his many adventurers. She also works for other adventurers, but none of them have been revealed at any point of the series.

Rance frequently calls her very often when he's in the middle of a job, typically in camps or other safe spots. Since he levels up very quickly, she finds herself being called very often by him during these times. Fortunately for her, when Rance finishes a job he has a tendency of laying down and stay inactive for some period of time, resulting in her not being called a single time. Aside from this, Rance is a very troublesome individual due to his nature of disrupting balance and the way his actions reduce conflicts and wars, so the Gods have grown to dislike him more and more over the course of the series, which places Willis in a pretty awkward position. She notices his lack of Level Cap during the events of Rance 03, where she was in utter confusion by the anomaly and noted that if he continued gaining experience forever he could even threaten the Gods sometime, though she also mentioned that it shouldn't be possible for a mortal to reach a Level high enough for that.

Even putting aside his disrupting nature, Rance's personality is already very obnoxious and tiresome to deal with. Because Level Gods are obligated to do some service for the client at certain levels, Willis periodically strips the higher Rance's Level is, since getting naked is what Rance likes. He sometimes has asked her for sex but she claimed that she isn't obligated to do something like that so he was rejected. The only time he was able to have sex with her was in Rance 02, where he assaulted her after reaching a Level high enough to complete the job he was doing at the time, which led her to refuse his callings for some time out of grudge, though she already forgave him by Rance 03.

As a Goddess recruited from a young human woman, Willis retains many of the physical traits typical of young human females. With a long and smooth red hair and a slim figure, she's an attractive and alluring woman that makes her popular as a Level God, as she's able to sign contracts with a fairly notable number of people. She dresses in a nearly divine fashion, boasting a long dark-purple dress, and a a long necklace around her neck at all times. The only fairly out of place thing she wears is an accessory that resembles white earmuffs, which she has had since her time as a human. Her contract with Rance makes her remove her clothing the more he levels up, but since her initial attire is extensive and reserved, it requires quite some time and effort from Rance to make her expose a lot of skin. Her earmuffs are the only things she never removes even when she's completely naked.

Personality-wise, she's mostly a cooperative and friendly person that dutifully does her job with joy and enjoyment. While she's amiable and gentle, she keeps a distance with her employer and treats everyone with formality and respect. She's cortious, even towards those that are easy-going and self-centered. She makes sure to follow the rules, but she's very benevolent and would never punish those that deliberately go against them. Despite her calm and affable disposition, Willis is a notoriously prudish person that becomes very shy when it comes to matters relating to sex, which tends to place her in uncomfortable situations when acting as Rance's Level God.

She's friendly most of the time and has a remarkable honesty and patience, shown by how well she can handle being Rance's level god. Despite the latter acting obnoxious or even asking rude questions, Willis doesn't mind and keep casually talking with him, despite the fact that she holds a higher status than him. The only time where she was shown mad at him was after he raped her during the events of Rance 02, vanishing and ignoring his calls for some time as punishment. Her patience has also allowed her to serve as a competent teacher to even somewhat irritating and amateurish apprentices like Mikan.

When she was human, Willis used to be in love with Mi Lordring, a priest from the AL Church, but it was an unilateral and unrequited love and she wanted to become a Level God to get closer to him. Unfortunately for her, when turned into a Level God, her former memories as a human were erased and she doesn't even remember how or why she turned into a level god to begin with, and started simply serving her duty as a Level God. It wasn't long after that she formed a contract with Rance.

As a Level God, Willis possesses both the authority and the ability to raise or drop the Levels of any mortal under her jurisdiction. She's capable of casting a mysterious spell that converts the experience points that an individual has accumulated through fighting into Levels and increase their sheer power. Despite being a fairly new recruit, she's talented for the job as she was never seen failing the spell that many rookies tend to perform unsuccessfully. This positive performance is likely also thanks to the experience she already had since working on a Level Shop as a human. After a few years, her dedication and talent has led her to even take apprentices to become Level Gods as well. In Rance IV, a bit more of a year since she became a Level God, she's gotten more experience and even has been educating a trainee level goddess named Mikan.

Her current rank in the Gods Hierarchy is not known, but as she's able to train newly recruited Level Gods yet she's not able to perform more unconventional spells like Andermille, she's presumed to be a Middle Class among Level Gods.

Since her ascension to Godhood, Willis was also given permission to live in the Gods Realm. However, despite being a God, her status is still that of a Level God, which is the lowest of the whole Hierarchy, so her powers can't even compare to that of truly powerful Gods or even Angel Knights. Furthermore, her fighting ability is nonexistent, and she's helpless even against any relatively strong human. She's, however, perfectly capable of instantaneously teleporting back to the Gods Realm if she finds herself in an unpleasant situation.

Willis as she appears in Rance VI. 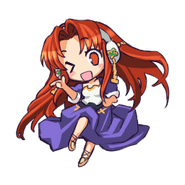 Willis in the Rance 01 OVA.

Willis' initial sketch for Rance VI.
Add a photo to this gallery
Retrieved from "https://alicesoft.fandom.com/wiki/Willis_Fujisaki?oldid=105293"
Community content is available under CC-BY-SA unless otherwise noted.