Wichita Skate is an attendant of Gandhi, and was born in the year GI1004. In the family of Skate that has traditionally guarded the Kings of Zeth. She is a loyal servant of Gandhi, and is called Suke-san by him. Like Kaoru, she is in love with Gandhi and holds an unquestionable respect and admiration for him. She is more loyal to Gandhi himself than she is to the country of Zeth.

As she studies as student in the magic school of Zeth, she also helped Gandhi in his adventurer as Punisher Mito. She is a friend of Kaoru, and both share the common goal of serving and protecting the king.

During the events of Rance X, Wichita, along with her companion Kaoru, join King Gandhi in his guerrilla opposition to the Monster Realm's invasion of Zeth. Due to their skill, the trio fight successfully against many Monster forces of much greater number, but focus their goal on defeating Dark Lord Medusa. Due to the branching nature of the story, there are several possible outcomes for Wichita and her ultimate fate is never clearly stated. However, in Rance X: Part 2 it is heavily implied that Wichita, Kaoru, and King Gandhi were unsuccessful in opposing Medusa and were violently killed by her (with Kaoru and Wichita receiving Medusa's usual violation beforehand).

Wichita is a rather short and slim girl of 158 cm tall. She wears the attire typical of the students of the magic school in Zeth and has a light red hair with a tied ponytail. She's 17 years old and her body is not too developed, but she's still an attractive young woman.

Personality-wise Wichita is the complete opposite of the composed and level-headed Kaoru. She is brash, energetic, and hot-blooded and way more active than the cool, collective Kaoru, but they both get along well and share a deep love for Gandhi.

It was always her dream to give her virginity to Gandhi in a romantic fashion, but that dream was shattered as she was raped by Rance, which caused her to hate him.

Wichita has a very rare talent as a spell-blader, and is proficient with both Magic and Swordplay, boasting Lv1 skills in both fields. She is a very capable combatant with a cap of 35 and is mostly adept with fire magic.

She's more trained at the use of the sword than magic, but uses elemental magic to grant her weapon fire properties, effectively making a flaming sword that makes her a much more dangerous opponent in the battlefield. 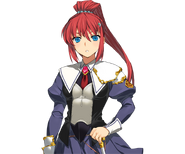