Vivid Kalar was the Kalar Queen from two generations ago, mother of Modern Kalar and daughter of Full Kalar. She was born in GI0810 and passed away in GI0920.

She was a languid person that found uneasiness in physical interaction, and saw sexual intercourse as a dirty and repulsive act. Despite this, she had a gifted mind, with great intelligence and talent for ruling. She had great respect for laws, rules, education and discipline. She was the one that created the Impregnation Ceremony in order to avoid Kalars to lower themselves to fornication with humans, who she saw as lowly, cruel creatures full of greed.

When she became the queen, she was more strict with Pencilcow's interaction with humans, and banned sexual activity for the sake of personal pleasure. Most of the laws that are still in effect today were established by her. Her disciplined nature led her to remain a virgin until her death.

She haunts the catacombs along with her mother and daughter. She possesses her granddaughter Pastel's body and fights Rance. She is defeated and raped by him. 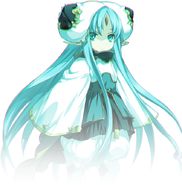 Vivid as a Ghost in Rance Quest.

Vivid's portrait in Rance Quest.
Add a photo to this gallery
Retrieved from "https://alicesoft.fandom.com/wiki/Vivid_Kalar?oldid=106434"
Community content is available under CC-BY-SA unless otherwise noted.