AliceSoftWiki
Register
Don't have an account?
Sign In
Advertisement
in: Articles with No Spoilers, Level Cap Reached, Characters,
and 4 more

Van Deloss Gaialord, predominantly referred to as Mummy Man (ミイラ男, mīra otoko), is the former vice-captain of the royal guard of the Kingdom of Ringer, an ancient desert country that was destroyed during the GI Era.

In life, Van Deloss was a loyal and dedicated soldier who worked tirelessly to protect his king, Zahaadus VI. After Zahaadus' death, Van Deloss, along with the rest of the royal guard, was embalmed and buried with Zahaadus in his crypt in order to continue serving him into the afterlife.

During the events of Rance 02, the contents of Zahaadus' pyramid were transported to the Free City of Kathtom to be used as the foundation for the dungeon maze of Mill Yorks, one of the four witches who had become corrupted by the power of the Phil Rings and taken over the city. Van Deloss was encountered by the duo of Rance and Maria Custard, who were attempting to navigate their way through Mill's maze to find and defeat her. The Undead guard revealed to the pair the location of the Phantom Beast Sword, a weapon with the power to harm Phantom Beasts that was buried along with his king, who had wielded it in life. However, he refused to tell them the warp code that allowed access to his lord's crypt until he was given the rare delicacy Uhaan to eat.

After acquiring the peach apple necessary for preparing uhaan and having the dish made for them by Elena LR, Rance and Maria delivered the food to Van Deloss, who happily ate it. Upon finishing his meal, Van Deloss explained that it was necessary for two women to engage in lesbian play before the transportation mirror in order to gain access to Zahaadus' crypt before returning to his coffin. While the rest of the remnants of the Ringer Kingdom were transported back to their original burial location after the four witches were defeated, Van Deloss inexplicably remained in Kathtom, and continued to live out his undead days in and around the city.

Van Deloss makes a non-speaking appearance in Rance X if Rance chooses to escort Maria to Kathtom during the operation to defeat the Dark Lord Lei, where he can be seen lounging on the map screen as the party approaches the city.

As Van Deloss is only encountered long after his death, it is unknown what he looked like in life. As an undead creature, Van Deloss has the appearance of a stereotypical mummy, with all of his features besides a single eye being obscured by bandages. His most distinguishing accessory is a small brown pipe which he carries around and smokes at all times when awake. Rance was unimpressed by his predictable appearance, calling him "a generic mummy" and having difficulty recognizing him as an important person, much to Van Deloss' displeasure.

A loyal soldier in both life and death, Van Deloss happily dedicated himself to the protection of his king for well over a hundred years. While he admits that he believes himself to have been overworked by his commanding officer, giving him little free time to spend with his family, he does not resent him for this, and expresses very few regrets about his long and difficult career. He is a man of simple desires who possessed the sensibility to acknowledge that it was for the best that he finally end his eternity of guarding his king in order to assist Rance, only requesting to have a last meal before willingly allowing him access to his master's crypt.

As the vice-captain of Ringer's royal guard, Van Deloss was likely a fairly skilled man while he was alive. He possesses an average Level Cap of 10, which he had reached by the end of his life, as well as a Leadership Lv1 Skill Level. As his level cap is not particularly notable, it is likely that he earned his high position through his talents as a leader rather than his individual fighting ability. Beyond this, he is also an extremely hardworking man, refusing to take any breaks from his duty of protecting the king for over 200 years, long after Ringer itself had crumbled.

Besides his natural abilities, Van Deloss gained the ability to continue functioning after his death due to becoming a mummy. As a mummy he was allowed to continue to walk the earth so long as he continued to uphold his mission of protecting his king, though as he had grown tired of doing so by the time he was encountered by Rance, he was more than willing to end his undead existence and finally enter into the afterlife. Van Deloss is shown to still be active in the realm of the living several years after ending his service to his kingdom, however, suggesting that the rules of his reanimation have since changed. 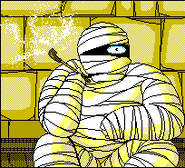 Artwork of Van Deloss from the Alice's Cottage 4/5/6 Guide.