They are tremendously agile, being able to quickly see and react to all their opponents attacks, and capable of accurately landing critical strikes consequently. They have a fearsome natural instinct for battle, one that would usually be deemed as "genius" when seen in a human, and their only tool is a shield as they use their bare hands as weapons. Legend says that they have a drop of God's blood running through their veins.

Personality-wise, they are typically very austere and only interested in battling strong opponents. They are confident in their skills, but take fighting very seriously and never underestimate their opponents. There is a stronger variant called Armored Valkyrie, which is clad in heavy armor. Their speed and accuracy greatly drops, but their endurance and stamina is higher.

They are seen almost like demi-gods due to their strength and the imposing figure they represent. Guy Monsters see having a child with a Valkyrie as a status symbol, resulting in many fierce fights, and one of the greatest prides for Monsters. 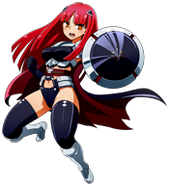 The Valkyrie in battle in Galzoo Island.

A young Valkyrie in Galzoo Island.

A Valkyrie using her arm as a deadly weapon.

A wallpaper included with Ouji-sama Lv1.5 of Odin.