AliceSoftWiki
Register
Don't have an account?
Sign In
Advertisement
in: Articles with Major Spoilers, Stubs, Characters,
and 5 more

Urza Pranaice is one of the Four Lords of the magic nation of Zeth, the former leader of the non-magic user civil rights group Ice Flame and one of the primary heroines of Rance VI: The Collapse of Zeth.

Born into a well known second-class Zeth family, Urza was exposed the lifestyle of a social activist from a very young age. Her parents, Cedric and Cornelia Pranaice, were influential figures within the non-magic user community due to their tireless efforts to lobby for equal rights between magic and non-magic users in the oppressively segregated nation, which heavily influenced the ideologies of both Urza and her older brother Bilfelm Pranaice. Both Bilfelm and Urza went on to become members of the Pentagon, the largest organized non-magic user rights group in all of Zeth, where their extensive experience with supporting second class communities allowed both to become members of the 8 Knights, the eight highest ranking individuals of the organization.

The siblings time in the Pentagon proved to be short lived, however, as they quickly found themselves at odds with the group's recently appointed Admiral Nelson Server and his extremist anti-mage ideals. This conflict came to a head in LP0002, where Nelson launched the December Revolution, a violent raid on the estates of Zeth nobility that resulted in countless deaths. Unable to put up with Nelson's refusal to take any action to achieve his goals beyond excessive violence, the siblings, along with their friend and fellow 8 Knights member Daniel Safety, broke away from the Pentagon to form their own, more moderate resistance organization known as Ice Flame.

Ice Flame proved to be surprisingly effective, as it was able to amass a substantial following after only a brief period of operation. While Urza was not initially the leader of the group, her passionate speeches about achieving peace and equality were responsible for countless people joining its cause. Most notably, Urza was responsible for the formation of the “Ice Thawers”, a group of bleeding heart patriots composed of both first and second-class citizens who resolved to spread her compassionate ideology throughout Zeth in an effort to remove the prejudice that plagued the nation.

Tragedy soon befell the Pranaice family, however, when, in an effort to rescue 300 second-class citizens, they were ambushed by the Zeth Security Squad. While Urza survived the attack, both her parents and brother were killed trying to protect her. The trauma from this event severely impacted Urza, who lost the ability to move her legs. Urza was appointed the new leader of Ice Flame following the incident, though, due to her family's death still weighing heavily on her soul, she had lost much of her prior drive. Though she made several efforts to continue writing to the members of the Ice Thawers in hopes that they would assist her in restoring Ice Flame's power and influence, she failed to receive any sort of response each time, causing her to fall even deeper into despair. Without Urza's charisma there to inspire them, the majority of Ice Flame's members left the organization to return to the Pentagon, leaving Urza with only Daniel, his son Abert Safety and her close friend Kimchi Drive around to support her. As a result, Ice Flame quickly became stagnant and ineffectual as Urza continued to lose faith in herself.

During the events of Rance VI, Urza was introduced to the warrior Rance, who had been scouted as a potential recruit by Abert. Captivated by Urza's beauty, Rance agreed to become a part of Ice Flame in order to have sex with her. While Rance initially attempted to seduce Urza into sleeping with him consensually, he was repeatedly stopped by Daniel, who recognized his true intentions. Fed up with his lack of success and bored with performing community service work, Rance finally decided to sneak into Urza's quarters during the night and rape her in her sleep. While Urza was awakened while Rance attempted to have his way with her, she put up no resistance to him, believing that it was a punishment from heaven for her past failures. Upon witnessing her passive acceptance of being raped, Rance decided to take advantage of Urza's weakness by convincing her to appoint him as the secret leader of Ice Flame. Already wallowing deep in self-hatred, Urza agreed to Rance's demand despite immediately recognizing it as a dangerous idea.

Following this, Urza was regularly visited by Rance at night for sex, during which he would also inform her of what orders to give out to the rest of the group the next day. Rance's first orders as shadow leader were predictably selfish, requiring her to devote a substantial portion of the group's resources towards locating and capturing his slave Sill Plain, as well as demanding that she fire almost every single male member of the organization, weakening the already struggling group even further. Though Daniel tried several times to convince Urza to reconsider these actions, as she no longer had any faith in herself as a leader, she refused him each time. In the midst of their night sex sessions together, Rance would also make efforts to encourage and try help Urza to regain the use of her legs, which slowly but surely sparked her to build up her muscles and practice walking again in secret; Daniel, as her physician, actually noticed this and begrudgingly credited Rance for Urza's changes during his final conversation with her.

Eventually, the more aggressive actions that Ice Flame had taken under Rance's leadership attracted the attention of Nelson Server, who approached the group with a request to collaborate together in the operation "Liberate the Motherland", which intended to topple the current government of Zeth by dismantling the nation's primary security system the Maginot Line and momentarily plunge it into chaos. Rance, eager to use the ensuing chaos as an opportunity to have sex with the most powerful women in Zeth, pressured Urza into accepting the offer. Forced to assist in an act of terrorism that went against everything she stood for, Urza contemplated committing suicide to atone, but was stopped by Rance. Completely dejected and without any will of her own, Urza passively complied to assist in an event that would lead to the total collapse of Zeth.

After the successful dismantling of the Maginot Line, Zeth was invaded by a large army of Monsters led by the Dark Lord Camilla. The monster forces began to immediately conquer the country, with both the military and the Pentagon too occupied with fighting each other to combat them. During this time, a sizable section of the monster army entered into the territory that contained Ice Flame's headquarters and attacked the group. Believing it to be a final punishment for her actions, Urza put up no resistance to the invaders, but was saved from death by Daniel. Unwilling to allow Urza and Ice Flame to die as shadows of their former selves, Daniel chose to reveal to her the truth behind the ambush that led to the death of her family, which was caused by Abert, who sought to test Urza's resolve in the face of hardship. The two became surrounded by several monsters soon afterwards, causing Daniel to give his life in order to buy Urza time to escape. Prior to his death, Daniel urged Urza to stand on her own two feet and make her own decisions, as well as to fight for what she believed in, not what others told her to. Moved by Daniel's sacrifice, Urza regained the determination that she had lost years ago and immediately began walking again to take up arms against her enemies. Utilizing her exceptional skills as a leader, Urza quickly organized an escape effort that allowed all of Ice Flame to escape from the ambush to Zeth Castle, which was acting as a temporary sanctuary from the attacks.

At Zeth Castle, Urza was greeted by several members of the Ice Thawers, who revealed to her that they had continued to receive the letters she sent to them, and that their responses had been intentionally destroyed by the mail carrier Ryouko Todoroki. Through their connections, the Ice Thawers were able to grant Urza an audience with the king of Zeth Ragnarokarc Super Gandhi. Together with King Gandhi, Urza devised a plan to evacuate the entire population of Zeth to the outskirts of the country. The evacuation proved to be a complete success and, after gaining the cooperation of Queen Lia Parapara Leazas, the population of Zeth was able to safely take refuge in and around the Adam Stronghold on the Leazas/Zeth border. Following this, Urza co-led the operation to reactivate the Maginot line and exterminate the monster invaders from Zeth alongside Gandhi. Despite facing impossible odds, the group succeeded in accomplishing the mission, in no small part thanks to Urza's leadership, and prevented the nation's destruction.

After the monster army's defeat, Urza was recognized as a hero for her actions and appointed to the position of one of the Four Lords of Zeth, the country's four primary government administrators, in the place of Papaya Server, making her, alongside colleague Chochoman Public, the first non-magic using member of the Four Lords in the history of Zeth. Immediately after becoming a member of the Four Lords, Urza began tirelessly working to restore Zeth, which had been severely damaged by the monster occupation, back to its previous power.

During the events of Sengoku Rance, Urza was sent to the nation of JAPAN to serve as a reinforcement commander for the forces of Oda House, which had been taken over by Rance, who had sent a letter to Zeth requesting the aid of a female commander. Despite Urza's position as one of the Four Lords normally preventing her from doing such a thing, she was given permission to go by her colleague and leader of the Four Lords Chizuko Yamada, under the conditions that she observe and report JAPAN's military power. While in JAPAN, Urza tested the prototype of the newly-designed long distance model of magical phone and successfully managed to place a call to Zeth castle while in the mana-concentrated territory of Izumo.

During the events of Rance Quest. At the request of her colleague Chochoman, who feared that she had been overworking herself, Urza was allowed a vacation from her duties as one of the Four Lords. Despite being on vacation, Urza continued to assist in the country's redevelopment, taking advantage of being outside of her office to interact with citizens and business owners on a more personal level. At some point during this time, Urza began exploring the Malgreed Dungeon, where she coincidentally ran into Rance, who was traveling with a former member of Ice Flame. Feeling nostalgic, Urza agreed to spend part of her vacation time traveling with Rance. Later, Urza participated in the Zeth National Athletic Meet alongside fellow Four Lord Magic The Gandhi and her former Ice Flame allies Caloria Cricket and Karma Atranger. 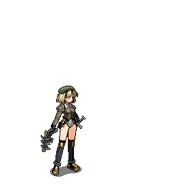