AliceSoftWiki
Register
Don't have an account?
Sign In
Advertisement
in: Articles with No Spoilers, Articles needing a Quote, Characters,
and 5 more

Katsuko is a samurai of the Uesugi House, profficient in battling with a JAPANese Katana.

She is in constant competition with Torako, rivalry that goes both ways. Their relationship is pretty bad, being constantly fighting and arguing, but they still trust in each other in the battlefield, and they both share great admiration for Uesugi Kenshin.

After defeating the Uesugi family, Rance picks her and Torako out of a lineup for H. However, she even treated this as a competition and felt superior to Torako because Rance chose her first over her rival. (Furthermore Rance commented she was prettier than Torako. However whether Rance genuinely thought so or was it a spur-of-the-moment remark because he was having H with her at that time is unknown.)

In Rance Quest she, along with Torako, follows Kenshin outside of JAPAN. She's next in line to replace Kenshin as the head of the Uesugi House after she gets married with Torako's brother, since Kenshin wants to leave the house to follow Rance. 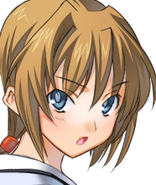 Uesugi as she appeared in Sengoku Rance.