Tsukuyomi Kinako is a student at Seijou Academy and the president of the Occult Club, of which she is effectively the only member. She constantly performs strange experiments which often results in explosions. Kinako is always seen carrying her doll Grimoire-chan, which she believes speaks to her.

During the events of Big Bang Age, Rouga fights Kinako in the cultural building. Afterwards, Rouga asks Kinako to join Wolf Fang. She will accept. However, if Yamamoto Burai has already joined, he will prevent Kinako from joining as he is deathly afraid of the occult and thus incompatible with her.

Kinako has blonde chest-length twintails and green eyes. She wears a female Seijou Academy school uniform with a navy blue robe over it. On her head she wears a cap with a similar navy blue color as her robe. She wears salmon-colored hairclips with a little flap that also matches the color of her robe. She's always seen carrying her doll Grimoire-chan.

As far as her personality is concerned, Kinako is considered by everyone as a strange girl, speaking about creepy and horrific things in a very happy and bouncy manner. Kinako, however, considers herself rather normal. She is obsessed with the occult and will frequently reference it when speaking with someone. Rouga generally appears to not like speaking with her.

Some of Kinako's battle sprites in Big Bang Age.

Some of Kinako's battle sprites in Big Bang Age. 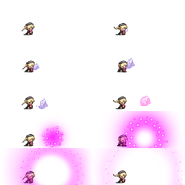