Towa is a professional storyteller hailing from the City-State of Hamlet, more specifically the hospital-town of Horatio, which is operated by her father, Senator Laertes. Towa is sponsored by the Bigbux Company to travel the world telling stories (and advertisements) to the disenfranchised, especially children. In this capacity, she also helped educate her future husband, Aster, about the history of the world's various countries. While on her journeys, Towa often does favours for her father and the administration of Horatio, such as collecting food orders from the Kingdom of Humpty.

Towa now lives in a house south of Stallion in the Kingdom of Eden, where she also maintains a sexual relationship with Erimo. While further afield, she continues her work as a storyteller and representative of Horatio, including collecting medicinal ingredients via her new family connections.

As both a professional storyteller and de facto healthcare provider, Towa is is very good with people and especially with children, who love her illustrations and storytelling style. She often attracts large crowds to her readings with her playful and engaging style, is able to help children through their long-term medical care, and maintains a professional bedside manner with adult patients.

Unfortunately, Laertes has left her with an incomplete sexual education and a great deal of sexual shame, even for the World of Eve, where prayer usually alleviates such matter to satisfaction. While Towa understands the medical points of reproductive health, she did not begin to explore her sexuality until Aster and Erimo's arrival in her life.

Towa is at least a moderately skilled storyteller, illustrator, and historian, and has irregular but reliable skills in various healthcare and pharmaceutical fields, as well as logistics. She is also a seasoned traveller in an era where travel is fairly irregular, and seems to have maintained a great deal of complex details, like the layout of Eden city.

Towa's sprite from the wives' screen in Evenicle. 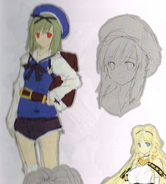 Concept art of Towa from the Evenicle manual.
Add a photo to this gallery

Retrieved from "https://alicesoft.fandom.com/wiki/Towa?oldid=102586"
Community content is available under CC-BY-SA unless otherwise noted.