The Toushin Tournament for Strong (or Powerful) Warriors, also known as the Tournament of the Gods, is an annual martial arts event held in Toushin City and established not long after its founding. Well established as the pre-eminent event of its kind, the Toushin Tournament is also known for its relative "no holds barred" ruleset and also for its "partner system" and the associated sexual forfeits for losing contestants.

The tournament is the centerpiece of all Toushin Toshi games. As each game is set in its own universe, each has its own incarnation of the tournament, but the general principles tend to apply across all universes.

The Toushin Tournament is an elimination-style tournament fought in multiple brackets. To qualify, a tournament hopeful must typically past some form of entance test, and must also be partnered with (or must themselves be) a beautiful young woman, a subjective standard determined by tournament staff such as Shuri Seihajuu Nagasaki. Tournament participants are expected to pay their own expenses during the tournament and must appear on time for their regularly scheduled matches. Prizes are awarded for each victory in the tournament, with the grand prize being a lifetime appointment to the position of general (or shogun) in the city's military, as well as a lifetime room and board in the exclusive Toushin Mansion for both particpant and partner.

Each tournament round is a one-on-one match, to the death or to surrender. The tournament's permissiveness when it comes to armament are famously loose. While Shuri has said that "anything that isn't a tank or battleship" is allowed in the matches, the actual outcome of matches has nearly approached these levels of absurdity: a Golden Hanny has joined the tournament, and in one instance a match was determined when fans of one participant mobbed the arena and killed the other. Nevertheless, a general grounding in martial ability and fairness are largely maintained.

In addition to the above, the losing party's partner (or the losing party themselves if entered as such) must pay a sexual forfeit to the winner, if the winner so desires. Technically, the arrangement specifies that, "The winner can do whatever they want with the loser's partner for one day," so long as they do not wound them, but alternate possibilities and even the duration of an entire day are typically thrown out in favour of a single sexual encounter or nothing, to the point where the contract might as well not say anything else at all.

To help Tournament contendors stay or get into shape with their world-class competitors, the Tournament typically administers a nearby dungeon for them to explore in between rounds, which also feature in the participants' qualification tests. These dungeons can be quite dangerous, as not only is there a (sometimes unspoken) rule that only one person may enter the dungeon at one time, but the dungeon is an otherwise untouched wild zone, just as dangerous as any other monster's den in the world, and typically larger. The participants could easily lose their lives in the dungeon without ever entering the arena.

As the Toushin Tournament is primarily a tourist event, it is broadcasted worldwide using Magic Vision. In addition to live comentary, Toushin MV offers a follow-up program called Toushin Tigest. The Tournament's chief comentator, Kuri, has become world famous, with a following in her own right. She is often joined by other comentators in this endeavour (depending on universe), including Shurt, Slasher, and Copandon Dott.

As the Toushin Tournament exists in multiple universes, each game can present major variations to the rules above.

The above description conforms largely to the Toushin Toshi version of the rules, with later games providing variations.

Recovery items are banned in combat, but all other items are allowed. After their day's forfeit, the losing party's partner also owes either a steep fine or a year's worth of indentured servitude to the city. 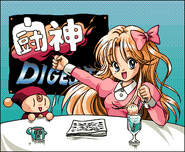 Toushin Digest with Slasher and Kuri, from Toushin Toshi II.