Toukichirou was an Apostle of the Dark Lord Xavier.

Formerly a simple baby monkey, Toukichirou was turned into an Apostle by his master hundreds of years in the past. While the exact reasons for his transformation are unknown, it is likely that he was chosen as an Apostle by Xavier some time after he was freed from the first time he was successfully sealed by the monk Geppei in order to have a minion who would assist in freeing him should he ever get sealed again. In the following two occasions where Xavier was sealed, Toukichirou utilized his innocent looks to become the pet of the various warlords whose houses were entrusted with the sacred gourds that contained portions of his master's soul in order to break them and free his spirit from within.

At some point after Xavier's third sealing, Toukichirou became the pet of Oda Nobunaga, the young lord of Oda House, which was at the time one of the most powerful houses in all of JAPAN due to the excellent leadership of Nobunaga's father. While Toukichirou intended to utilize Oda's military power to gain access to each of the gourds containing his master's soul after the nation had successfully conquered each of the other houses that possessed one, eventually ending with Nobunaga's body being used as a host for his master, his plans were compromised by Nobunaga's poor health and peaceful nature, which caused Oda to quickly lose most of its power, resulting in its most influential people going into hiding. Because of this, Toukichirou was forced to put his scheme on hold and continue to act as Nobunaga's pet until the next opportunity arose for him to gain access to the other gourds.

During the events of Sengoku Rance, Toukichirou was able to finally resume freeing his master when the warrior Rance arrived in JAPAN from The Continent and befriended Nobunaga, who gave him permission to become the secret leader of Oda House, allowing him to conquer the rest of the nation's within the country and giving Toukichirou access to the other sacred gourds in the process. Toukichirou first began his mission while Nobunaga was showing the gourd owned by the Oda family to Rance, where he took advantage of Nobunaga sneezing and knocking the gourd off its pedestal to break it open without drawing attention to himself. By doing this, Toukichirou was able to have a portion of Xavier's spirit inhabit Nobunaga's body as well as grant his fellow Apostle Rengoku the strength to free himself from his Human host.

Following Rengoku's unsealing, Toukichirou left the vast majority of the remaining work unsealing their master to the stronger and more capable Apostle, though he would take action himself if Oda hadn't conquered a nation in possession of a gourd for an extended period of time by sneaking into the enemy nation's territory and breaking its gourd. After four of the gourds had been broken, Xavier was able to gain dominance over Nobunaga's body and Toukichirou loyally returned to serving him. During the final battle between Oda's forces and the Demon Army, Toukichirou fought by his master's side and attempted to defend him after he had been defeated, where he was slashed in half by Rance, killing him.

On additional playthroughs, the player is able to gain the ability to have Rance kill Toukichirou after becoming annoyed with his loudness before Nobunaga shows him Oda House's sacred gourd. Panicked over having killed Nobunaga's beloved pet, Rance will find an identical baby monkey and present him to Nobunaga as Toukichirou. With Toukichirou dead, none of the sacred gourds are broken and Xavier and his other Apostles are given no opportunity to be freed, allowing Oda House to conquer all of JAPAN without the threat of the Demon Army looming above them. After all of JAPAN has been conquered, Nobunaga will reveal that he was aware that Rance had killed Toukichirou the entire time, with him renaming the new monkey Hiyoshimaru.

Toukichirou appears in the non-canon Kichikuou Rance, playing much of the same role to that setting's version of Oda Nobunaga as he does to Xavier, acting as a loyal pet. Toukichirou plays a very limited role in the game, simply riding on Nobunaga's back and occasionally talking with him. Once JAPAN has been conquered, Toukichirou will die alongside his master. While Toukichirou is still considered to be an Apostle in this version of the setting, his status as such is never mentioned in-game.

Despite being an Apostle, Toukichirou's appearance was virtually identical to that of an ordinary baby monkey, being a small, adorable simian with brown fur and a white underbelly with a large tuft directly beneath his chin and the fur on top of his head styled into a top knot. After resuming his role as Xavier's Apostle, he gained a small black and red cape, as well as a small pile of skulls which he stood atop when in combat. Despite his youthful appearance, he is referred to as having been Xavier's first Apostle, implying that he was actually the oldest of Xavier's five Apostles.

Toukichirou's intelligence seemed to be far beyond that of an ordinary monkey, likely due to his nature as an Apostle increasing his natural capabilities. He was able to orchestrate multiple plans to free his master across the three additional periods when he was sealed, all of which succeeded, and was able to avoid drawing suspicion onto himself due to his innocent and unassuming appearance, allowing him to remain unsealed even after his fellow Apostles were. While he was incapable of speech, instead uttering the usual howls of a monkey, those who were close to him such as Nobunaga, Xavier and his Apostle colleagues were capable of clearly understanding what he was saying. Besides his natural cunning, he appeared to have had a cheeky and playful personality, and was frequently seen screwing around when not actively trying to free his master.

As an Apostle, Toukichirou was completely devoted to serving his Dark Lord master Xavier, working tirelessly to free him whenever he was sealed. Xavier appeared to be particularly fond of Toukichirou out of all of his Apostles, letting him ride on his back and shoulder at all times and not requiring him to do any additional work for him once he had been successfully freed. Toukichirou's loyalty to his master was so intense that he gave his life attempting to defend Xavier.

Some time after Xavier's third sealing, Toukichirou became the pet of Oda Nobunaga in hopes that his nation would be able to conquer the other territories that possessed the gourds containing Xavier's soul, intending to have Nobunaga's body act as his master's eventual host. While Toukichirou only became Nobunaga's pet to aid him in freeing his master, he seemed to genuinely enjoy spending time with him, maintaining a playful and carefree attitude even as it became less and less likely for Oda House to be able to gain access to the gourds. His decision to choose Nobunaga to be the host of Xavier's spirit further suggests that he was fond of him and would be willing to serve him as a master, causing him to show concern for his poor health whenever he became particularly sick. While Nobunaga was entirely unaware of Toukichirou's true nature, he nonetheless viewed him as a beloved pet and would frequently allow him to ride on his shoulder and give him treats.

Due to being an Apostle, Toukichirou was much stronger than his appearance would suggest. At the time of his death he was at the surprisingly high Level of 30, a higher level than a large portion of the Continent's population. He was also very agile, and was able to skillfully evade Rance's attacks several times through speed alone. Despite this, his very small size prevented him from ever being a particularly formidable opponent, causing him to rely much more on his cunning outside of battle to accomplish his goals, only fighting to assist his master during their final battle.

In combat, Toukichirou used a weapon known as the "Waraji Shuriken" to battle his enemies. This shuriken contained a potent poison that, while incapable of dealing very much damage at all, drained its target of their stamina, causing them to lose one of their actions within a battle. Though not particularly useful on its own, when fighting alongside the extremely powerful Xavier, Toukichirou was able to greatly assist his master by debilitating their opponents to a point where they were too exhausted to continue fighting. 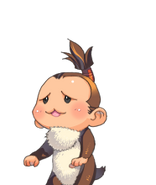 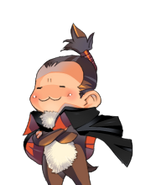 Toukichirou's portrait as an Apostle in Sengoku Rance. 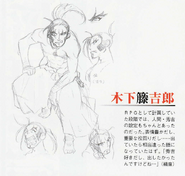 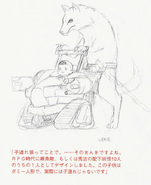 Concept artwork of Lone Wolf and Cub from the Sengoku Rance guide book.

Toukichirou alongside his master in the Harem Master Trading Card Game.
Add a photo to this gallery