AliceSoftWiki
Register
Don't have an account?
Sign In
Advertisement
in: Characters, Male characters, Empire of Japan,
and 2 more

Tougou Tsuyoshi is the main protagonist, as well as an initially playable admiral, of Daiteikoku.

Protagonist of Daiteikoku. Minister of Imperial Japanese Navy. He is an Admiral known for high winning-percentage—the result of his unorthodox fleet strategy. Tougou was appointed, by the Empress, after the previous minister died in the war against the Chun Empire. Many ships and veteran admirals were lost in the war, so he must recruit new admirals and rebuild the Navy.

Two years ago, his Gamerican wife, Tougou Scarlet , died in a spaceship accident, and he is currently living with his only daughter, Maki; everybody around him acknowledges his strong attachment to his daughter. He is easy-going, and carefree. However, he has a strong desire to build a peaceful, safe world for his daughter to live in.

Tougou was a playboy before he was married. After his wife's death, he has returned to the playboy lifestyle, and maintains several dozens of relationships with women. He is very competent with his job, is very sensitive/understanding to women, and is skilled in lovemaking.

Due to this, he is very popular with ladies. However, he does not wish for his women to live unhappy. He believes "I want to make as many woman as possible happy. That's why I date them all."

His attitude is well-known by the people around him, and the women in relationship with him acknowledge the fact they cannot keep him for themselves.

"Hahahaha! Well, just leave it all up to me. Trust me."

Extra Skill: Sometimes Maki will assist him in battle, reducing all damage by 9999 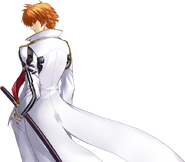