AliceSoftWiki
Register
Don't have an account?
Sign In
Advertisement
in: Articles with Minor Spoilers, Articles needing a Quote, Characters,
and 6 more

Topaz is a member of the Jewel Three, the loyal group of Apostles that dutifully served Dark Lord Ithere since the Gele Era. At some point during such time, she was born as a common human and was eventually found by Ithere, who gave her his blood and turned her into his Apostle, vowing servitude to her new master as a result. As her apostle, Topaz has served Ithere for around 1500 years with unquestionable loyalty, supporting him in every event he takes part in and assisting him in any way possible. When the Demon King Gi passed away and the Monster Realm was divided as a consequence of his actions, Topaz joined the Hornet Faction following her master's decision to support Hornet.

She made first appearance during the events of Rance 03, fighting alongside Ithere in the 7th Helman-Leazas War against the Leazas Liberation Army. Her first major involvement was in The Battle of The O, where she engaged in combat against Shizuka Masou and Maria Custard, who was utilizing the military tank Tulip #3. During the battle she, along with the other members of the Jewel Three, employed a combined Black Destruction Beam against Maria's Tank, severely wounding it as a result. However, when they use it again in an attempt to finish off their enemy, the shot is deflected by Shizuka's own White Destruction Beam.

While they were unable to permanently defeat the Tulip, they forced Maria to withdraw from the battle and maintained a dominant stand against the Leazas forces. While Ithere himself faces Shizuka, the Apostles are attacked by Rance's group, who arrived to assist Shizuka and Maria in the battle, where she's finally defeated by the brutish warrior, who wasted no time to rape her on the spot. Not long after, the Helmanian forces start losing dominance and Commander Thoma ordered to retreat, resulting in the victory of the Leazas Liberation Army. She, along with the other members of the Jewel Three, managed to retire safely from the battle despite their defeat.

She re-appeared along with her master during the accidental unsealing of Demon King Gele at the hands of Rance, who unknowingly removed her seal upon obtaining the Dark Lord-killing Blade Chaos. She immediately knelled along with her allies to the revived Demon King and, following her orders, she along with Ithere and his other Apostles begin searching for Chaos and its wielder.

She eventually managed to find Rance and his party on the west tower of the Leazas Castle, where she was able to successfully brainwash Rance and acquire Chaos in the process before reuniting with Sapphire. However they're quickly confronted by members of his party, who show little hesitation in fighting him despite being his ally, much to the Apostles confusion. With the defeat of the brainwashed Rance both of them end up defeated again so after, resulting in them being captured by the leazas prisoners. Some time later she, as well as Garnet who had also been defeated by Rance on a different location, manage to escape while barely clinging to life and make it to Ithere's side, who was also defeated by Rance and was dying from mortal wounds he received during the battle. The three Apostles didn't hesitate and traded the blood he originally gave them upon becoming Apostles to heal his wounds. Reduced to mere humans, they perished immediately after, but they managed to save their master's life.

Topaz is a rather diminutive girl with an extremely youthful appearance and with immature proportions more akin to that of a child. She's flat-chested and a small body, with only her hips being surprisingly large. She has a light skin tone and boasts a long blonde hair. She shares the same strange attire with her fellow Apostles, sporting long dark purple pants and an armwear of the same color, while leaving her chest completely exposed and publicly displaying her tiny breasts. She also wears a strange-shaped yellow Helmet on her head, as well as a long bow of the same color. As if purposely contrasting with her yellow theme, her eyes are instead of a brilliant blue. Under her eyes she carries a sinister shadow combined with a devilish smile, giving her a more villainous expression than her companions.

Like many Apostles, Topaz is disrespectful towards humans, deeming them as inferior, and she's confident and proud of her own abilities, though she's not above praising them if they manage to impress her in any way. She's somewhat playful in a mischievous and impish way, and she enjoys teasing her fellow Apostles Garnet and Sapphire just for the amusement of it. Much like her companions, she has an incomparable love and admiration for her master Ithere, and she's completely devoted to him. She will follow every command without hesitation, and her loyalty and admiration leads her to go through absurd extents to serve her master, not doubting in throwing away her own life to ensure Ithere's. Her love for her master is only comparable with that of her teammates, and they're in a constant competition for his affection and care, with Topaz perhaps being the most upfront about it. She's attached to her master and doesn't like to leave his side unless he requires her to. Despite their rivalry her relationship with Sapphire and Garnet is a very close one, almost like that of sisters and they're very capable when working together.

As an Apostle that was gifted with enhanced powers due to the blood of her master, Topaz is a moderately powerful individual that stands above regular living beings. She's talented with Magic and has profficiency comparable to that of a Lv2 user, as well as inheriting the same mind controlling ability all the members of Ithere's Apostles share. Her brainwashing ability is quite powerful, with her speed for it being particularly exceptional and she takes great pride from it. Her most powerful attack is the Yellow Destruction Beam, a spell similar in shape and technique to a White Destruction Beam but of a bright yellow tone instead. She's also capable of mixing this attack with the special attacks of Sapphire and Garnet, creating an empowered Black Destruction Beam powerful enough to inflict high damage on the heavily armored military tank Tulip #3 designed by Maria Custard. 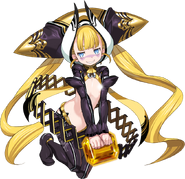 Topaz's portrait after being defeated.