Tilde Sharp is a very ambitious girl from the Kingdom of Leazas who made her goal to become the #1 female soldier. She's a commander of a platoon of the Leazas's Royal Guard, raising as a young and promising knight that is often called the "hope" of the Leazas Royal Guard. At present in LP0006, she's only 15 years old, making her one of the youngest knights in the military, but her talent and record makes her a respected figure despite her young age. Her goal in life is to one day be the world's greatest female knight, to be strong, and to excel in every regard.

She was first introduced in Rance Quest as a platoon commander of the royal guard. She was enlisted in the Military after winning a few fighting tournaments and became the leader of her platoon after challenging and defeating the former captain in a duel. She eventually tried to challenge Leila as well, but she refused, leading an irritated Tilde to claim that "she was scared of losing".

In Rance IX, she was revealed as one of Rance's Fated Girls and joined the Helman Revolutionary Army along with Rick Addison right after Rance joined as the Commander of its Elite Group of Outlaws following the orders of the Queen Lia. They joined disguised, acting as regular citizens rather than as representatives of Leazas to avoid Helmanians to think that Leazas was involved with the Revolutionary Army, so she doesn't wear her distinctive Royal Guard Armor.

A surprisingly petite girl that stands at only 144 cm tall, Tilde's body doesn't particularly stand out for being particularly alluring, but she proves herself as attractive enough thanks to her feminine disposition and smooth personality. She sports a short green hair with a big white bow on her head, as well as eyes of the same color. While she's usually clad in the traditional and revealing golden armor of the royal guard, her armor of choice is quite different to the standard of the royal guard, being surprisingly more reserved, feminine and elegant, with additions like a cape and a long skirt.

She's a very charismatic person that usually hides under the mask of a charming and friendly girl, and is highly skilled with dealing with people. Behind her facade hides a more scheming and opportunistic mind that often relates to others for whatever personal desires she has. She's intelligent and captivating, always assessing new tactics to reach her goals and planning far ahead. She will take whatever means to accomplish her objectives, and has used her charm to successfully seduce men in more than one occasion in order to obtain a potential favor, which is one of the reasons why she rose through the ranks so quickly. She's very ambitious but also extremely prideful, and will get carried away when she gets praised a lot. She speaks in a very formal and arrogant tone most of the time and aims to be a perfect woman in every regard. She considers herself an A A A woman, Femininity: A, Sword skill: A, Intelligence: A, and sees other skilled women as her rivals, grading them accordingly. While she's slept with many men in the past, in search of a life partner she's very strict and would only accept to marry a man that fits her qualities of an "Ideal Man". The conditions she gave were that said man should be strong in heart and mind, charismatic, decisive, and someone that follows through without hesitating when they decide to do something.

She has developed a strong (one-sided) rivalry with her senior Leila Grecni, due to her great skill as the Captain of the Royal Guard and her status as the strongest woman in Leazas, and she aims to take her position one day. Upon meeting Tokugawa Sen during the Helman Revolution, she also declared her to be her rival as well, being that she is a top class woman that she is aiming for. She usually deems every strong woman she encounters as a potential rival or adversary, but she holds great respect for strong men such as Rick Addison. She's not delusional though and is perfectly aware when someone surpasses her, which would only encourage her to work harder as a result. Despite her naturally unfriendly disposition towards other women in general, she's a good friend of Arlcoate Marius, who was enlisted with her in the Military Academy and trained as a knight alongside. She's a supportive friend, who recommended her to the Leazas Black Corps and praised her skills as a Tactician. Arlocate's timid and unassertive personality is the reason they get along well.

She is hardworking and diligent, willing to accept training from any warriors she sees as strong, and she strives to do it with elegance. Normally, she is a feminine and graceful girl, but when battling, her attitude changes completely, becoming aggressive and ruthless, with no hesitation or fear whatsoever. She hates losing or retiring in battle, traits that come from the most prideful sides of her personality, but she sees defeat is also a source of inspiration for improvement and is not one to get disheartened with ease. When in bed, she turns out to be a very lascivious girl, and she used her body to gain advantages with high-rankings in more than one occasion. At first, she attempted to seduce many of the males in the Helman Revolutionary Army, but with the passing of time she discovered that Rance is the kind of man she likes. Even though she claims to dislike the idea completely at first, in her special ending she accepts that she might have already fallen for him long ago.

True to her arrogance, Tilde is a very competent and talented fighter. Her current Level is 40 and has a Lv2 skill in Short Sword Combat, which means she might have already surpassed Leila Grecni as the strongest woman in Leazas, and has a Level Cap of 44. In battle she maintains an elegant and graceful combat stance with her swordplay looking like an appealing dance that is both attractive to watch and deadly to experience. She's very confident in her skills and doesn't fall back with ease. She's a very skilled fighter that shows no mercy towards her opponents and can continue assaulting them with several consecutive thrusts of her sword for long periods of time, as well as having a remarkably high agility thanks to her small and athletic body.

Additionally Tilde is not only a skilled fighter, but also a surprisingly excellent pastry chef as well. Crook claims that this skill of her is also Level 2, making her a master pastry chef. Despite her natural ability to prepare confectionery, Tilde doesn't like this talent of hers one bit, since she's someone that wants to be praised for her prowess with the sword, rather than her skill in the kitchen. 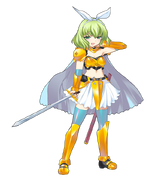 Concept artwork of Tilde from the Rance Quest guide book. 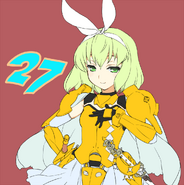