AliceSoftWiki
Register
Don't have an account?
Sign In
Advertisement
in: Articles with No Spoilers, Articles needing a Quote, Characters, Male characters

Thunder Cross is a legendary hero whose great feats have spread far and wide across The Continent for several generations. While no individual has ever been documented as having encountered Thunder Cross in the flesh, countless stories exist that tell of his exploits.

Said to live in seclusion in the northernmost corner of Helman, Thunder Cross wanders throughout the Continent year round vanquishing evil, helping those in need, and spreading justice. Rather than money, he is rewarded for his efforts with various gifts from the people he assists. On the night of the 24th of December of each year, Thunder Cross sneaks inside of the homes of the well-behaved boys and girls of the Continent while they sleep to leave some of these gifts for them to receive the next morning. Because of this, the 25th of December is recognized as the holiday Christmas by many people to celebrate Thunder Cross' heroism and the general goodness that people are capable of.

Thunder Cross' legend is told to children of all subspecies of the Protagonist Race, including Humans, Kalar, and Poppins. As no evidence exists to confirm whether or not Thunder Cross is actually a real person, however, most individuals cease believing in him after early childhood. Despite this, most parents continue to tell their children the stories of Thunder Cross due to the popularity of Christmas, and instead buy gifts for their children themselves to maintain the illusion. Contrary to this belief, Thunder Cross is in fact a real person who will leave behind presents for well-behaved children whose parents did not already buy things for them on Christmas.

Thunder Cross is briefly mentioned by Rance during the events of Rance 01 while examining the then-king of Leazas Golden Wensding Mark 2 Hakushaku, where Rance compared the overweight, bearded and red-clothed king to him.

During the events of Rance Quest, the kalar queen Pastel Kalar read a story about Thunder Cross to her daughter Reset Kalar while visiting her at Rance Castle in the winter. Reset immediately became fascinated by the story and, wanting to receive presents of her own, began eagerly declaring her excitement for Christmas. These exclamations were overheard by Reset's father Rance, inspiring him to have a party thrown within the castle on Christmas Eve as a present for his daughter. After a night filled with fun, Rance and Reset attempted to stay up late to see Thunder Cross in person, but both ultimately fell asleep before they were able to do so. The next morning, the pair awoke to find that each had been visited by Thunder Cross, with Reset receiving several stuffed animals and Rance receiving a rare Shell.

Thunder Cross is a man wearing red-colored metallic armor and a matching red face-concealing mask adorned with the American flag. While he is presumed to be human, his age and species are entirely unknown. As no real record of Thunder Cross' physical appearance exits, his image is frequently distorted within media portrayals, with some choosing to represent him as an elderly man with a large white beard wearing ordinary red clothing rather than the armored hero that he truly is.

A compassionate soul, Thunder Cross has dedicated his life to spreading peace, love, and justice across the Continent. While he asks for nothing in return for his heroism, he is almost always rewarded for it with presents from others. Due to his natural altruism, Thunder Cross chooses to give these gifts to the well-behaved children of the Continent in order to inspire them to continue performing good deeds rather than keep them for himself.

Despite his legendary reputation, Thunder Cross is an extremely elusive person. He resides in the ferocious tundras of the farthest corners of northern Helman, where very few people would dare to venture into. In addition, he refuses to make his presence known to others when delivering gifts on the night of Christmas Eve, and has never once been seen by another person when doing so for countless Christmases.

Thunder Cross is accompanied throughout his travels by a flying mechanical steed constructed in the shape of a red-nosed reindeer. Nothing is known about this creature, leaving it a mystery whether it is fully sentient or not.

Thunder Cross is notably one of the few men that the brutal warrior Rance genuinely admires, to the point where he continues to believe in the legendary hero long after the age where most people choose to begin thinking of him as a myth. Rance has never encountered Thunder Cross in person, but has made numerous attempts to do so on various Christmas Eves throughout his life.

While the full extent of Thunder Cross' abilities are unknown, he is suggested to be a powerful fighter who successfully punishes all evil that he comes across. He also seems to be highly-resilient to the elements, as he is able to survive living in the deadly Helman tundra without a problem. Finally, Thunder Cross is implicitly a master of both speed and stealth, as he is able to infiltrate the homes of all of the well-behaved children of the Continent within a single night without being detected. 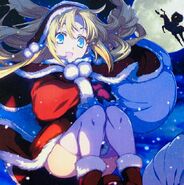 Artwork of Thunder Cross and Alice-chan from the Alicesoft blog.