AliceSoftWiki
Register
Don't have an account?
Sign In
Advertisement
in: Articles with Minor Spoilers, Level Cap Reached, Characters,
and 5 more

Thoma Lipton was the former General of the 3rd Army of the Helman Empire. He was a prime example of a non-standard man, and he was referred to as the World's Strongest Human on multiple occasions, with his strength recognized by many individuals of immense talent and skill.

He was a soldier for many years, as he was widely known all over The Continent and represented one of Helman's most important figures, having participated in many of its wars and battles with greatly influencing over them. Not only he was an incredibly strong man, he was also an amazing leader and commander, greatly beloved by everyone for being as just as amiable. Thoma carried many of the traits of an ideal Helmanian knight, being both a noble man and an incomparable fighter. He was universally respected in the military, and there were many talented individuals like Karl Ojisan that wanted to work in his division due to the great admiration they had for him. Thoma was also a close friend of Lelyukov Berkov, the General of the 1st Army and another of Helman's greatest soldiers, and the two had known each other for decades, having been friends since their old days as mere recruits.

He was also a righteous man of great compassion, as he was willing to take youngsters under his wing to train them and turn them into great people, being the Prince Patton Misnarge and Aristoles Calm good examples of this, who ended up growing with his son, Hubert Lipton, as childhood friends, and the three formed a long-lasting friendship as strong as brotherhood. He's a caring father, but the weight of being the son of the World's Strongest was certainly heavy for Hubert, who developed a sense of inadequacy due to not being able to live up to his father's name.

During the ill-fated invasion over Leazas led by the Prince Patton Misnarge in the 7th Helman-Leazas War, Thoma was finally brought down during an intense battle with the Supreme Commander of the Leazas Liberation Army, the adventurer Rance. The counter-offensive of the Leazas Army over the City of North, attempting to reach the capital where the Prince Patton was hiding, was successful after Thoma's fall and managed to retake the city as a result. He was 53 years old at the time of his death. After his death, the second in command of the 3rd Army, Minerva Margaret, succeeded him as the General of the 3rd Army.

Like it's a standard in Helman, he was a very corpulent and tall man of 220cm. Even in his old days, he still had a very tough and worked body. With his large frame and massive height, Thoma was an intimidating presence to all that witnessed his might first hand. He had a short red hair and very prominent eyebrows, usually combined with a serious expression. He was clad in a huge black armor, even bigger than that of the typical Helman Knight, and was armed with thorned iron balls wielded through a chain.

He had a calm, mild and sedate disposition, with an unquestionable loyalty and great love for his country. Thoma was a very stubborn man with an incomparable strength and tenacity. He was admired by many for his unmatched combat skills and was a very charismatic leader that would treat everyone equally, regardless of their position or strength. He was nice to his subordinates, but hard on himself, usually pushing to extremes and blaming himself for the mistakes of the Army and taking all the responsibility onto himself. He was a man of great experience, that endured many hardships and took place in countless battle, going through many years of military hardship and taking great pride of his status. While he was a humble man, Thoma was perfectly aware of his uncontested status as the World's Strongest, and claimed his title with pride and dignity.

As the man that took the role of a father figure for Patton, he supported him in the succession dispute, actively and directly, and he was politically hostile towards Stessel Romanov and Pamela Helman, who he considered corrupted. He taught Patton everything he knew, about how to fight and how to be a good leader. He has also been good friends with Hunty Kalar from the Council of Eight for many years. They were both together in Patton's mother's last moments, as Thoma carried her to Hunty, and they were the ones that took the responsibility of raising Patton. Decades later, they still remain close friends. Prior to his last battle, Hunty showed concern over Thoma and admitted to be scared he would die. Thoma laughed and said that he is Thoma Lipton and that he wouldn't die easily, although he mostly said this to keep Hunty from getting worried.

Before his last battle Thoma envied Leazas's blue sky, saying how Helman's was always grey and cloudy, and regretted that he didn't teach Patton enough about the world.

This was proved by his abnormal fighting performance. Despite his old age, he was capable of fighting several hours heavily outnumbered and come out victorious.

He was a firm wall that could not be penetrated or moved, some even described him as a terrific force of nature turned into a human. He had reached his impressive cap of 72 before dying and also had Lv2 skills in Hammer Combat and Leadership.

He was also capable of enduring and stand his ground against the Tulip 3, a tank design by Maria for military siege something even Dark Lord Satella's top apostle, Caesar, had a hard time dealing with, yet he was capable of beating up the tulip and even punch away cannon balls.

Even a devil like Feliss, who used to be 6 class in the Devil Hierarchy, was completely terrified and didn't even consider the idea of fighting Thoma, proving his massive strength. Despite how arrogant he is, Rance acknowledged Thoma's strength and was particularly proud of being the one that managed to ultimately take him down. 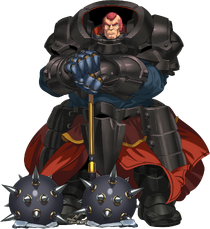 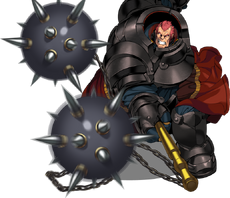 Thoma in battle in Rance III. 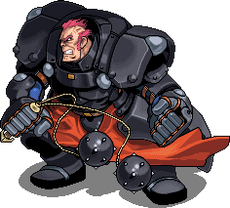