Tenrou Kunagi is a main heroine, and one of the three main characters of Daibanchou: Big Bang Age. Kunagi is a part of the respected Tenrou Family, an ancient family line who first arrived in Japan a thousand years ago. She has lived most of her life with her childhood friend, Zanma Rouga, who was part of the lesser-known Zanma family. She often spent time with Rouga as children, ever since the Tenrou and Zanma clan's made a temporary alliance, and would often play and comfort him in times when Rouga was feeling lonely and depressed. As the heir of the Tenrou, Kunagi became a practitioner in Tai-Chi in order to become strong enough to defend the clan when the time would come for her to be its leader. Meanwhile Rouga was training alongside his older brother, Zanma Gou, keeping up the spirited fighting tradition of the family.

In spite of all this, no matter how hard Kunagi trained, she grew frustrated with her slow progress compared to Rouga, and her older brother, Tenrou Kamui who was famous for his strong feats, and who was at the time, the most powerful member of the Tenrou family. Kunagi then spent time researching about a way she could exponentially increase her power, she later finds out about a sacred artifact that was stored inside one of her families dojos, without knowing what it was capable of, she touches it, and feels a mysterious power emitting from her body. The feeling was a demonic curse of the evil demon that would give her body multiple enhancements of power, in exchange for manifesting on her B-Power like human ability. Kunagi, who was afraid of this demon at the time, came crying to her brother for help, Kamui then spent the next few years of his life researching a way to undo the curse of the archfiend, in fear of Kunagi's decreasing safety. This led Kamui to become frustrated and obsessed with the chance of returning Kunagi to normal, that he became possessed by an evil entity known as the Wicked Chaos, in exchange to save her. In future events, Kunagi then finds out that her brother was defeated and killed by Rouga's brother, Gou, she then grieved for his loss.

After this, in order to prevent her beloved childhood friend, Rouga from remembering the truth of that day, she and Gou mange to cooperate with each other, despite her feelings of hatred that would slowly but surely die out for him, to create a spell in which would be cast on Rouga to prevent him from remembering the demise of Kamui. Later years have passed on by, and Kunagi has become more mature and aware of the position that she is in, in order to seal away the Hell Hole in the future, and change Japan for good. However, thanks to the demonic curse that manifests on her ability, Kunagi's B-Power have been exhausted, and she must revert to her wolf form, which resembles her clan's symbol of the white wolf.

Kunagi has curtained, straight, silver colored hair that is tied into a ponytail, her hair is also decorated with unusual ornaments. Her eyes are amber colored, and she has on a blue Chinese dress, wearing a cupless corset, decorative belt, over the knee socks, string ribbon tie, and wristbands. Kunagi has an attitude stereotype of a "Kuudere" meaning that she often has on a blank expression, looks emotionless, and always has on a stern expression. She is quiet, and usually has a hard time making friends with others, she covers up to this by saying "that she's not interested", and is also very cold towards others, she even has a reputation of being cold towards Rouga, but she still cares about him, and has the utmost faith in his abilities. She keeps this posture throughout most of the entire game, unless Rouga is teasing her about how cute her voice sounds at times, she will often times try to mock a cute, high pitched voice to his liking.

Kunagi has multiple forms throughout the game, first is her normal form, which is how she is actually supposed to look like in the present, she is more taller, more mature, and serious, her voice also changes drastically, Rouga also likes to point at the fact that her breasts are even bigger, which usually results with him getting punished by a slap, or a bite. Then she has her shrinked state, in which she appears throughout most of the game, her body reduces in size and reverts back to as she appeared two year before the games prior story. Lastly, she has her wolf form, she reverts into it when she doesn't have enough B-Power.

Ever since touching the demonic artifact of Tenrou, Kunagi has access to a demonic form, which increases her power and strength exponentially. However, it is not like Senna's demonfolk form, in which she loses complete control of her body. While Kunagi is affected by the Demon Curse, she can control her power at will, and completely devastate opponents. This power is even further detailed in her route of the game, when Wolf Fang takes control of the Nightmare Eyes faction, when Kunagi encounters her brother Kamui. She intends to seal away the darker personality that controls over Kamui, only to have Rouga rush in and find out about the two massive powers that have been channeling alongside the two siblings. After a long discussion, Kamui reverts back to his normal self, and Kunagi and Rouga promise to him that they will be able to seal the Hell Hole as they're primary goal, knowing this..Kamui becomes satisfied, even knowing that he will have to fight them soon, in order to fully achieve his death in which he so long desired.

Once Rouga finds out about Kunagi's demonic curse, both Gou and her have no choice but to tell Rouga the disheartening truth, that they've used their B-Ability to seal away part of Rouga's memory so that he could forget about the day Gou killed her brother Kamui, and have kept all ties to her demonic background a secret in hopes that Rouga wouldn't reject after witnessing the power of the demon take over her completely. She becomes depressed and attempts to flee Wolf Fang, but is stopped by Rouga, who tells her that he would never stray away from loving Kunagi, due to the amount of friendship they've attained for years. Even if all odds were against him, and Kunagi turned completely demonic, he would never raise his fists against her since he loves her that much, Rouga prevents Kunagi from leaving and promises to protect her no matter what.

Rouga and Kunagi have known each other since childhood, so prior to the game's events, they already have a well-maintained relationship. However after being possessed by the demonic wolf, Kunagi has feared that Rouga wouldn't like her anymore, and reject her, which is the main reason she had his memory sealed. However, Rouga then tells Kunagi that he would have loved her otherwise, even with the demonic curse, as he has loved her throughout all of the years they have spent with each other. After a scene where Kunagi and Gou tell Rouga about the truth of his memory, Kunagi tries to leave Wolf Fang to put an end to her cursed bloodline, however Rouga stops to embrace her, he then makes it upon himself that from now on throughout his journey of conquest, that he would put Kunagi's safety and protection above all else, because he to, is afraid of losing her.

Kunagi was in fact, betrothed to Rouga, making her his fiance, however, due to the unsettling conflicts which resided between the Tatemikado, Tenrou, and Zanma clans, this declaration of marriage was only temporary, and not official, because the Tenrou authorities were still debating on whether or not to have Kunagi marry someone from a lower class family such as the Zanma clan. Rouga, who was tired of being discriminated against, chooses not to follow the strict family guidelines, and do as he pleases, in direct rebellion to all three of the families morals. Even though in the present their conflicts weren't really as impactful as they were in the past, Rouga still decides to conquer Japan, so that he can change it by taking away the discrimination. Kunagi also doesn't want to have the family rules get into the way of their relationship, because Rouga was an important friend who loved spending time with her during cheery days. Rouga would often help out with Kunagi's social problems, and help her out whenever she was being made fun of, which resulted in Rouga getting into a lot of fights, usually with him ending up beat up, she then would treat him. These childhood days spent with Rouga are bliss memories that Kunagi treasures.

After being unofficially betrothed to Kunagi, Rouga takes it upon himself to further develop their relationship beyond just normal talking and getting along, Kunagi responds to this by accepting the fact that they are no longer children, but adults, meaning that she wants to be with him too. They begin having sex every other turn throughout the game, after the School Chapter.

After this, Kunagi and Rouga take it upon themselves protecting each other no matter what, in hopes that their marriage does become official, so that they can spend the rest of their lives with each other.

At the very start of the game, Rouga is about to be transferred into Seijou Academy and contemplates to himself about how his life may change after being enrolled there. Kunagi appears alongside Rouga in her Wolf Form wanting to join him on the first day but took heed to his advice in standing back for now. When she finds out how Rouga with a few other students are revolting against the arrogant, corrupted banchou who controls Seijou Academy, she and Gou join Rouga's party in an attempt to free Seijou from Yamizaki Akito's control.

Kunagi has the best evasion stats in the whole entire game, meaning that she can easily avoid offensive attacks most of the time, meaning that the player wouldn't have to worry about restoring her health throughout the game.

Kirisaku Mono: On the ground, Kunagi flings a shockwave along the floor. In the air, Kunagi tosses a disc at a 45-degree downward angle.

Goumagetsu: Kunagi jumps into the air with a slash, encircling herself with a crescent.

Aoki Kage Shinsoku: On the ground, Kunagi teleports in one of three ways relative to the opponent. In the air, Kunagi falls to the ground.

Shuntensatsu: Kunagi teleports above and behind the opponent, attacking with a large crescent slash from above. On hit, it continues into a barrage of aerial dashing attacks ending with a hard knockdown.

Artwork for Kunagi in the Daibanchou guide book. 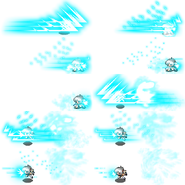 More Kunagi Sprites
Add a photo to this gallery
Retrieved from "https://alicesoft.fandom.com/wiki/Tenrou_Kunagi?oldid=98552"
Community content is available under CC-BY-SA unless otherwise noted.