Tenrou Kamui is the main antagonist and final boss of Big Bang Age. He is Kunagi's older brother, and Gou Zanma's best friend. He has dissociative identity disorder, causing him to switch in between his normal personality, and the personality in which he is possessed by the Wicked Chaos, a depiction of his evil self reflecting his dark past, and villainous desires.

Kamui is a descendant of the middle-class Tenrou clan, who fought alongside the high class Tatemikado clan, and the lower class, but strong Zanma clan, during the liberation of freeing Japan from demons that spawned out of the Hell Hole a century prior to the game's events.

Due to living most of his early childhood days with Kunagi without the care of his parents, he became more self-observant and protective. His main goal, was to keep Kunagi safe and by his side at all costs. One day, he found out that Kunagi became infected by a demonic wolf curse after touching one of the Tenrou family's sacred artifact. He became a biologist, and would effortlessly strive to find out a way to undo the curse, so that it doesn't eat away at Kunagi's body and completely take over her. This led him to become more furious and insane because of his strong conviction to keep his sister safe.

Later, Kamui met the fiend who was responsible for the death of his parents. The demon had the answer Kamui was seeking to put an end to Kunagi's curse; however, he would have to give up his body and moral sense if he wanted to lift Kunagi's curse. After accepting, Kamui slowly mastered Dark B-Abilities and the Wicked Chaos took over him completely. He would eventually revert back to his normal senses after time, but would change into his Wicked Chaos personality again at the most random moments.

After journeying and training with Zanma Gou and Yukina Tatemikado, Kamui was once again taken over by the Wicked Chaos. The demon inside Kamui forced him to reopen the Hell Hole, which Gou and Yukina had fought desperately hard to close, and attacked Gou willingly with all of his force. His rising dark B-Ability's proved to be too much of a threat that Gou had to use all of his strength to put Kamui to death. It was at this moment where the young Zanma Rouga and Kunagi walked in on the scene, saddening Kunagi.

It was rumored for years that Kamui died after this, Gou and Kunagi even managed to put a proper spell on Rouga to make him forget about the traumatizing event that occurred. However, it was only a matter of time before the Wicked Chaos would slowly, but surely bring life back into his body, causing him to wreck havoc during the events of Daibanchou: Big Bang Age.

Kamui is dressed in a a long black garb/cloak suit and armor, resembling a dracula-like V collar colored red. He has on yellow shoulder blades and a yellow colored belt. He wields a lighting-bolt designed Tenrou clan blade that is well-known for causing massive elemental damage with it's destructive B-Power Abilities. (See Abilities) He has long, silver hair that covers his left eye, his eyes are hazel colored.

While Kamui is renowned for his great fighting ability and has made a name for himself in his clan, (thanks to the prowess he's shown) Kamui is rather introverted, silent, and at times rather angsty to others that aren't his sister. He treats Kunagi different than how he usually treats others. Kamui acts nice, genuine, and is caring when it comes to her, due to their close relationship of being the only two watching out for each other during childhood days. Other people he has shown to have a close relationship with was his former best friend and rival, Zanma Gou, love interest, Yukina Tatemikado, and Zanma Rouga, Gou's younger brother. Kamui would often not pay attention to Rouga when Rouga desired attention, often looked down on him for not being as strong, and for being a potential nuisance especially when it came to Kunagi, who was a dear friend of Rouga's.

When Kamui is taken over by the Wicked Chaos, his personality completely changes to being a much less caring and darker individual. He would rejoice in others pain and would want people to spread their despair so that the Hell Hole's force would remain stronger since it is powered by evil emotions.

While on his quest to put an end to the hell hole conflict once and for all, he knew and foreshadowed that only the latest descendants of the Zanma, Tenrou, and Tatemikado clans were able to due so, due to previous family members from earlier generations having their B-Power exhausted, this includes Gou and himself. Kunagi was the most powerful descendant of the Tenrou family currently, especially since her body is able to maintain the spirit of the white wolf, the Tenrou's family symbol, and the current Zanma heir, Rouga was capable.

Thus, Kamui needed to find the heir of the Tatemikado family fast, and bring them to the newly formed Wolf Fang, the banchou team that Rouga and Kunagi were currently apart of.

Kamui traveled to the NPI controlled areas of Japan, only to be attacked by the suitable heir of the Tatemikado Clan, Kyoudou Senna, who was at the time, possessed by the demonfolk. After defeating Senna in combat, he realized that she was suitable for being the Tatemikado representative and brought her unconscious body towards Toukyou, the territory where Wolf Fang was currently residing. While on his way, Kamui stumbled across a much older Rouga, and told him that it was his destiny to live his days with the Tatemikado resident, Senna. Kamui then entrusts Senna to Rouga, and leaves Rouga, telling him that they will meet again.

Kamui is the final boss of the game, and is fought at the end of the National Chapter, after inspecting the Hell Hole. In the second phase of the fight, he reverts to his God form (only available if Senna or Kunagi's love level is at or above 8)

He gained most of his abilities after being possessed by the Wicked Chaos, granting him newer, and more powerful Dark B-Power

Flight: Kamui can glide, and fly in the air for a predestined amount of time.

Regeneration: Kamui can restore health after being partially damaged.

Lighting Manipulation: In his days as a Tenrou clan resident, Kamui mastered the art of Lightning magic.

Dark Magic: While possessed by the Wicked Chaos, Kamui cam harness Dark Matter spells, thanks to his new B-Abilities.

Telekinesis: Enhancement by the Wicked Chaos.

Immunity: Enhancement by the Wicked Chaos.

The "Death" of Kamui 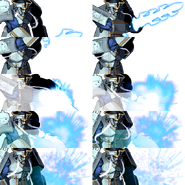 Add a photo to this gallery
Retrieved from "https://alicesoft.fandom.com/wiki/Tenrou_Kamui?oldid=85780"
Community content is available under CC-BY-SA unless otherwise noted.