Tami John is a member of the Helman 3rd Army who appears exclusively in Kichikuou Rance.

Tami's past prior to joining the Helman Army is largely unknown, though it can be assumed through his association with the Margaret siblings, who were born into poverty, that he came from a similarly harsh background. At some point in the past, Tami was attacked by a group of Monsters and beaten to the verge of death. He was miraculously saved at the last moment by Minerva Margaret, a woman in possession of both terrifying strength and ambition. As a show of gratitude, Tami swore total loyalty to Minerva and her younger brother Maha Margaret, dedicating his life to serving and protecting them.

During the events of Kichikuou Rance, Tami accompanies Minerva and the rest of the 3rd Army to defend the country's capital Lang Bau from the invading Leazas forces. Though Tami can be fought and killed in battle conventionally, should the player fight the 3rd Army for several turns without defeating him, Minerva will order him to confront the Leazas Army alone, which he reluctantly complies with. After entering the battlefield, Tami's army triggers an explosive trap set by Minerva, defeating the enemy at the cost of sacrificing his and his soldiers' lives. During his final moments, Tami expresses shock and outrage that Minerva would betray him despite his loyalty.

In the canonical timeline, Tami's character is largely replaced by Isaac, another 3rd Army soldier who believed himself to be the right hand man of Minerva only to be betrayed and indirectly killed by her. Despite this, Tami's name reappears in Rance IX attached to one of the elite Helman knights fought in the optional stage "Helman Assault 5", though the character uses a generic model and does not speak.

Tami is an incredibly large, muscular man with tan skin, short blonde hair, a large facial scar, and a generally intimidating appearance. His clothing consists of the unique uniform worn by soldiers of the 3rd Army following Minerva's appointment to the position of general, consisting of an iron cuirass, a long blue skirt, purple shoes, and matching purple gloves. Finally, Tami wears a bell collar with an "M" engraved onto it around his neck to display his position as the Margaret siblings' servant.

During his appearance in Rance IX, Tami lacks the unique design he possessed in Kichikuou Rance and instead shares his portrait and character model with all other Helman knights classified as distinct "Army Ace" type enemies, which features red-colored armor to distinguish itself from generic knights.

A man of few words, much of Tami's character is informed by his actions. He is a gruff, austere individual who fights ferociously for those he has sworn his loyalty to and shows no mercy towards those he considers to be his enemies. Tami could be thought of as a prime example of a person raised in the harsh and unforgiving environment of the Helman slums: rugged, hostile, and ready to stoically handle any challenge thrown his way.

Tami devoted himself to serving the Margaret siblings after they saved his life in the past. He is extremely dedicated to this position, and rarely leaves the siblings' side. In spite of his loyalty, Minerva has no personal attachment toward Tami, perceiving him to be as expendable as any other soldier. This unbalanced relationship potentially results in Tami's death, where he is callously killed by Minerva to serve as a decoy to debilitate the Leazas Army. Should this occur, Tami shows both shock and sadness that Minerva would throw away his life so easily, suggesting that he had believed Minerva to care much more about him than she actually did.

A massive man with a towering frame, Tami is a deadly opponent with strength and abilities comparable to a general. He possesses a high Level Cap of 42 and a current Level of 37, bestowing him with a great deal of individual potential as a warrior.

In battle, Tami wields a large two-handed axe with ease to cut down his foes. He is incredibly tough and resilient, and is able to withstand several attacks from an entire army and still stand.

In addition to his individual strength, Tami seems to be a skilled commander, leading a very large unit of powerful Helman knights to great effect, allowing him to be able to defeat sizable sections of enemy armies while minimizing casualties within his own. 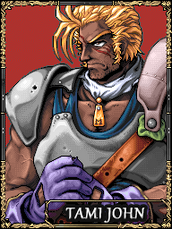 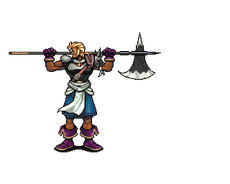