Tamagushi Fuuka was a common Miko of JAPAN. At some point, Fuuka experienced a mysterious accident and she was found unconcious by the local population on the outskirts of a small town in territories of the Oda House. When she regained conciousness, she realized that she had no memories of her life, and was given the name Fuuka temporarily. She quickly noticed her abilities as a Miko and used her talent as a healer to assist the townsfolk in exchange of basic necessities. She frequented on the humble shop set by Oda Nobunaga and Kouhime in Owari, forming a casual friendship with Kou, and she was eventually noticed by the secret ruler of the Oda House Rance when he arrived to JAPAN. Interested in her abilities as a Miko and finding her a very attractive woman, he convinced her to join as a commander of the Oda House in exchange of providing her living comfort. She was initially reluctant since she thought of herself as a problematic person without any clear past, but Rance wasn't troubled by it and insisted on joining anyway, which she accepted.

Upon becoming a commander and joining Oda's forces, Rance starts thinking about how to convince her to have sex with him since he believes that she's too pure to accept without any reason to, so he decides to have her agree to "reward" him if he manages to conquer three enemy nations, as the unification brings peace in the process. After Rance manages to take over three Houses, he will joyfully request Fuuka for sex as per their agreement.

Later on during an event, Rance asks her about a mysterious stone she carries around, which she herself doesn't know the origins of. She claims that when she regained conciousness after losing her memories, she was tightly holding it and believes that it is a clue to find out about her past. As Rance feels sorry for her, he begins researching about her. Eventually, upon running across the Miko Institute, he quickly realises that it is likely that she used to belong to the institution, but refuses to believe that she's from a prostitution center and, since she doesn't remember anything about it either, they both just discard the idea. Rance continues to make several(futile) attempts to restore her memories, but he achieves little. After Rance conquers the Miko Institute, having its leader Natori join the Oda House as a result, Fuuka will meet with her in an attempt to uncover a possible clue about her past, but Natori will hide information and simply claim that she doesn't know her.

Eventually, it is revealed that Fuuka was one of the Mikos selected to be sacrificed to Orochi as part of the ritual performed by the Miko Institute to quell the Holy Beasts earthquakes. On the past, Fuuka served as one of the institution's prostitutes, accumulating Soul Polution for the day she would be sacrificed to Orochi. When that day arrived, Fuuka was eaten by Orochi, perishing in the process. The Souls of those that are eaten by Orochi do not pass on however, but they mutate into beings called Orochi Girls, a slave of Orochi strayed from the Reincarnation Cycle. When Natori descended to Orochi's Dungeon along with Rance and Fuuka, her proximity towards Orochi restored her memories, revealing this story to Rance. She also revealed that her real name is Habikono, and that the stone she carries is one of Orochi's scales, which allowed her to retain her conciousness despite being separated from Orochi. As Rance doesn't want any more women to be sacrificed to prevent Orochi's earthquakes, he originally intended to take down the Holy Beast, but hesitated upon finding out that doing so would kill Fuuka as well, since her existance is directly tied to Orochi. Wether Orochi is fought or not depends on the player's decision, making Fuuka's fate vary from staying forever as Orochi's slave upon recovering her memories. Canonically, Rance gathered many of the strongest fighters in JAPAN and defeated Orochi in a fierce battle, freeing Fuuka and allowing her Soul to be sent again to the path of reincarnation.

Fuuka has the appearance of a young and attractive woman with a long and flowing black hair that fell past her waist. She was slightly petite and with a slim figure, boasting a flawless white skin, as well as two remarkably beautiful purple eyes. Her outfit consisted of the traditional attire wore by Mikos, which is the reason why she was immediately assosiated with the Miko Institute. She has a glowing pink tattoo of a snake on her back, proof of her real identity as a slave of Orochi.

She was beloved by the townsfolk because of her sweet and serene disposition, as she regularly assisted those that helped her after she lost her memories with her talents as a healer. She was compassionate and gentle, always prioritizing others well-being over own, and with a naturally selfless behavior that led her to offer her help to anyone in need. She was a perfectly pure and incorruptible that always thought about how to be of use to others, especially towards those she feels she has a debt towards, and she would always think about her actions beforehand to avoid causing trouble to others, something that greatly disturbed her. She wasn't against the idea of having sex with strangers, as she believed that if the other was happy with sleeping with her then it's only a good thing for her to share her body, though she also stated that she would refuse to sleep with someone she had reasons to dislike.

During her time as a Miko, she was completely devoted to her duties and saw her sacrifice as the duty she had to carry, holding a very strong sense of responsability for it. However, she still expressed great suffering and despair over her fate, begging Rance to defeat Orochi so that she could be released from her torment once she regained her status as an Orochi Girl. Despite losing her memory, her link to Orochi could be sensed by her, as getting too close to the dungeon where he resided would lead Fuuka to face what she perceived as an inexplicable panic attack. She was seemingly afraid of Orochi and her will to escape from him was strong enough to allow her to overcome his will and abandon his terrain with one of his scales, albeit this was at the cost of her memories. She was able to live a somewhat happy and peaceful life after escaping from Orochi, but her lack of knowledge over her own life still saddened her a lot, even if she didn't show it.

She met Rance near the beginning of Sengoku Rance and was immediately curious by his odd personality, accepting his invitation to join the Oda House and agreeing to his bold request for sex upon conquering other provinces. As Rance progressively dedicated more time and effort to learn about her past, Fuuka developed a lot of appreciation for him, and viewed him as someone very dear to her. During her final moments after Orochi's defeat, Fuuka expressed only happiness and gratefulness towards her benefactor.

Fuuka is a fighting Miko, meaning that she's specially trained to be both a fighter and a healer. She's fairly capable on the battlefield, wielding a Bow with a decent skill, while also being able to employ healing magic to restore her allies' energy mid-battle. While she wasn't particularly skilled, her good Level Cap of 36 and versatility in battle allowed her to be a reliable ally. Because she's never received any formal training however, her performance in large scale battle of armies is not so impressive, and is mostly capable of providing her companions with a decent source of support without any notable results.

Her greatest weakness is the fact that her life is tied to Orochi's, meaning that if his life were to end so will hers. Not only that but because Orochi Girls whole existance is directly connected to Orochi's power, being separated from him would make her body to immediately start fading until she dissappears entirely. She's able to prevent this by carrying one of his scales with her at all times. Additionally, if she makes direct contact with Orochi, she becomes unable to respond to her own will, reduced to nothing but a slave incapable of ever doing anything but stay at the Holy Beast's side for eternity. 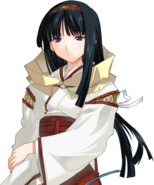