Suzutani Musou was a well-known swordsman from the nation of JAPAN.

A skilled swordsman who was particularly recognized for his great agility, Suzutani made a name for himself working as a mercenary, lending his skills to whichever one of JAPAN's many warring nations was willing to pay him the highest. Over time, he attracted many followers who wished to train under him and develop their own skills further. Suzutani would often bring his students into battle with him to give them firsthand experience in real combat. When not working as a mercenary, Suzutani lived a quiet and peaceful life in a small village in Naniwa, where he enjoyed brewing tea and preparing meals for himself and his students.

During the events of Sengoku Rance, Suzutani was hired by the Tenshi Sect to assassinate Rance, the shadow ruler of Oda House who was mistakenly believed to have been responsible for starting a fire at the Sect's headquarters in Hieizan that led to the destruction of its sacred monastary and the deaths of 3,000 monks. Suzutani, along with his students, attempted to launch a sneak attack on Rance by ambushing him at his army's encampment after a battle. While the group was instantly spotted by the Kunoichi Suzume upon entering the camp, she allowed them to pass through due to Rance having earlier requested her to leave the strongest assassins alive for him to fight personally, and instead simply alerted Rance to their presence. Suzutani and his students then fought against Rance, Suzume, and Rance's slave Sill Plain, where they were defeated and killed relatively easily.

Suzutani makes his most prominent appearance in Uesugi Kenshin's route, where he is revealed to be one of the candidates in the Emperor's Race to determine the next leader of JAPAN. If Oda is able to successfully scout out the location of Suzutani's house, Kenshin will gain the option to challenge him to a duel to remove him from the race and obtain more points for herself. When challenged by Kenshin, Suzutani reveals himself to be a fan of hers, and agrees to fight her under the condition that she allow him to cook for her afterwards, to which she happily accepts.

Should Kenshin fail to challenge Suzutani following a certain interval of time, the Dark Lord Xavier, possessing the body of Oda Nobunaga, another candidate in the race, will ambush him in his home. While Suzutani's great speed allows him to avoid Xavier's relentless attacks, his old age eventually causes him to run out of stamina, opening him up to be killed.

Suzutani was an elderly man with long gray hair and a matching gray mustache and beard dressed in a light green kimono. His wrinkled face was almost always contorted into a sly grin, giving him a rather mischevious appearance.

A friendly and casual man, Suzutani was generally willing to cooperate with anyone who sought out his services. This openness resulted in him taking in several young warriors as his pupils. He also seemed to enjoy having guests in his home, and took any opportunity he could get to prepare food for them. Suzutani did not appear to be a particularly ambitious person, and showed no interest in becoming emperor of JAPAN when the possibility revealed itself to him, instead preferring to continue living comfortably in his small village.

Suzutani was one of the Goddess of War Uesugi Kenshin's many admirers. When approached by Kenshin for a duel, he expressed amazement at meeting her in person and happily agreed to her challenge. Suzutani and Kenshin are shown to get along well, with Suzutani's love of cooking complimenting Kenshin's voracious appetite.

A seasoned old swordsman of considerable renown, Suzutani was a very formidable warrior. He possessed an above average Level Cap of 33, which he had reached by the end of his life, making him substantially stronger than a significant portion of The Continent's population. Suzutani's strength and reputation were recognized by both Suzume and 3G, who considered him to be a strong opponent even for the super-humanly powerful Rance and Kenshin.

In combat, Suzutani utilized a sword to great effect. In particular, he was noted to fight with astounding speed and agility that allowed him to swiftly take down his enemies. Suzutani's movements in combat were so nimble and fluid that they were frequently compared to those of a monkey by observers. This maneuverability allowed Suzutani to hold his own against the Dark Lord Xavier, an opponent several times stronger than he was, simply due to his skill at dodging attacks. Due to his old age, however, Suzutani lacked the sufficient stamina to maintain his great speed for more than a few minutes at a time, causing him to become winded fairly quickly when forced to go all out.

Along with his fighting ability, Suzutani seemed to have been a very skilled chef, with even Rance being forced to admit that his cooking was delicious. Suzutani appeared to enjoy cooking just as much, if not even more than he did fighting, as his one request to Kenshin in exchange for fighting her was to allow him to cook for her. 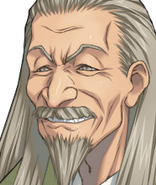