Suzume is an easygoing kunoichi from Iga House and also known to be the best kunoichi in JAPAN. She's the main informant and espionage operative in Rance's conquest of JAPAN. She defected from Iga because Oda House (under Rance's leadership) is less restrictive and more relaxed.

When she met Rance she thought of him as an interesting person, someone who seems to act and think differently than ordinary people. From that point, she began to follow Rance and is assigned to be his personal bodyguard throughout the events of Sengoku Rance.

Since Kunoichis are meant to use their looks to seduce males, she's a very beautiful woman with a very provocative outfit and an extremely low neckline. She wears a Kimono that looks like it's gonna fall at any moment and high thigh socks. Her clothing choice combine with her long beautiful hair. She also has a necklace with a bell for some reason. Her hair at the top resembles two cat ears and has big golden eyes that also resembles that of a cat.

Suzume is a very playful and relaxed ninja that lives a bright, carefree and happy life. She's cheerful and energetic, often taking hostile situations lightly and fearlessly. However this is only in looks, since she takes every situation very seriously and never drops her guard.

She was considered the best ninja and kunoichi in JAPAN and was easily bored by the lack of challenge in her missions. She wasn't particularly fond of sex and only saw it as a tool to perform her assassinations, that is, until she met Rance, who she chose not to kill because she claimed that was enjoying her time with. She's very loyal to him and is always willing to follow any silly plan he has for the sake of having a good time. Infact she doesn't even question his ideas even if she thinks they are dumb. A good example of this is when Rance attempted to defeat ninja master Inukai in a solo battle and Suzume agreed to help Rance to find him, despite the fact that she knew Inukai is an expert ninja that specializes in one on one encounters. She's also not very optimistic but tends to make jokes in negative outcomes, like when Rance was about to fight Uesugi Kenshin, she claimed that it was nice meeting him, implying that she thought he was gonna die. While she said it in a joking manner, she actually believed it and was surprised to be wrong. She's extremely perceptive, she quickly noticed before anyone else that Kenshin fell in love with Rance after their first encounter. Also, Suzume and Natori were the only ones that notices that Isoroku was pregnant during the epilogue.

She prefers to be in places without much restrictions and where she's allowed to joke around and have fun. She really liked Rance after she met him and started acting as his bodyguard after she was hired by the Oda House. She protected him of hundreds of assassins during his time of JAPAN, so much infact that she's a big reason as for why he managed to survive. Sometimes, she can be very nurturing and protective with others, almost like a big sister.

Despite her fun-loving demeanor and young age, she is deceptively mature, insightful and experienced. This is probably due to being trained as a ninja from a very low age and having experienced many different and hostile situations. She also sees the death of a comrade as something natural and is aware of the fact that she could die any day and accepts it.

When she was a baby she was taken to the Iga Clan and raised to be kunoichi, where her performance was outstanding and impressed everyone. She claimed she had a lot of fan in the kunoichi academy. She is hinted a few times to be attracted to Inukai, though she does not let these feelings get in the way of her loyalty to Rance.

Suzume is an extremely capable kunoichi and ninja. Kunoichis are master assassins that use their bodies to seduce their targets and perform assassinations during sex. Their bodies are filled with poisoned traps and can also employ several techniques to kill their targets during sexual intercourse. Suzume has a Kunoichi Lv3 skill and, thus, has a natural talent that allows her to master ninjutsu without having to work hard. She has a 100% mission success rate, and has performed over 100 assassinations of important people. There used to be people who see her as a rival, but so far none have defeated her. She gets easily bored from the lack of any sort of challenge. She's a living legend as a kunoichi, and some ninja masters consider her the greatest kunoichi to ever live.

Aside from her skill as an assassin, she's a very strong fighter. She has a Ninja Lv2 skill and a very high cap of 49, with her current level being 40. She's very agile, silent and efficient. She has proved to be able to kill several other ninjas in the blink of an eye with little effort. She's very cautious and clever, and usually remains hidden without anyone noticing and is always around when someone's having a secret conversation. Nothing goes unnoticed by her and is always with her guard up, despite her carefree attitude.

Even the head of Iga House, Inukai, admits that Suzume is probably stronger than he is. Despite of her reputation, she develops a rivalry with Kousaka Yoshikage and seems to be unable to ever defeat him, although most of their matches have been very light competitions like Rock, Paper and Scissors.

Upon hearing the rumor of Oda's secret ruler to be a foreigner, the head of Iga, Inukai, assigns Suzume to spy and assassinate said foreigner, in which she gladly accepts.

After killing fifty bodyguards from Oda, Suzume at last met Rance, the foreigner in question who is currently slacking-off with Kou and Sill at Tea House Nobu. Despite of her dramatic entrance, Rance doesn't seem to be afraid of Suzume, he even thinks of Suzume as a fine woman more than an assassin.

After said event, Suzume feels intrigued to know Rance more. In the next day, Suzume once again appears to assassinate Rance at Oda Castle, though the latter doesn't seem to take it seriously. Knowing that it would be better and more fun to work under him, Suzume accepted Rance's offer to stay as his subordinate, thus betraying her hometown, Iga.

In one of her events, Suzume told Rance that she just attended her fellow kunoichi's funeral. She said that every kunoichi has limited lifespan considering the amount of poison they planted in their body, and they are fated to die young. Rance, who doesn't like the idea, orders Suzume to never use said method anymore as she belongs to him only. Though Suzume responded by saying that it was actually just a joke, much to Rance's anger. Seeing how honest and caring Rance is, Suzume feels grateful that she decided to stay in Oda.

Along with (the unwilling) Kanami, Suzume is mainly assigned to protect Rance from any harm as his rising reputation throughout JAPAN is making him popular enough to be targeted in assassination attempts. To add, she also partakes in every mission that is related to spying.

Suzume plays a major role during the fall of Iga. With her ninjutsu, she is able to find Inukai's hiding place, thus making him visible and prevent him from escaping.

While fishing, she accidentally discovers Gumo Danjou, kills him and sends his head to Inukai in a box.

She encounters Magic, who she trains in sexual techniques out of pity.

In the epilogue, Suzume is shown enjoying her days with Kou and the rest right after Rance's departure to the continent. She and Natori seemed to be the only ones who noticed Isoroku's pregnancy at the first glance.

Suzume appears as one of the main heroines, along with Senhime and Kanami. She and Kanami are put through hellish training by Inukai to improve their skills.

She follows Rance into the Copa Empire during the events of Rance Quest. She was sent by Inukai to capture Crane. Here she eventually dies due to the poison in her body, proving that she wasn't kidding back in her talk event in Sengoku Rance. However, because of her lingering feelings and attachment to life as well as feelings of regret for a certain underachieving ninja, she remains with Rance as a ghost till the end of the game and helps Kanami get stronger. Her soul was eventually able to pass on and left a letter of thanks to Rance. She was 19 years old at the time of her death.

Suzume returns in a non-canon event. Having returned from the dead, Suzume quickly bonds with the young ones and has a happy reunion with Oda Kou, Sen and Kanami. In one event, she, Sen and Kanami talk about the events of Slash! Thrust! Burn!. In Part 2, Rance and Kanami have a daughter named Uzume that is very similar to her. 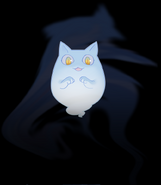 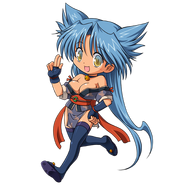 Suzume's appearance in Three for the Slash! Thrust! Burn! 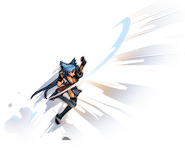