Suzuki is a Haniwa and somehow the owner of a local Pub in the town of Kathtom. He appeared in the game Rance 02.

It is unknown how Suzuki acquired ownership of a Pub in a human town, yet despite his mild displays of typical Hanny ludicrousness, he seems to run a successful business. As owner of the pub, he employs Elena LR, allowing her to periodically make use of the tavern as her casual brothel. His responsibilities include overseeing bar operations, interacting with customers, and mixing drinks for them - Rance comments that it is a mystery how he accomplishes this last feat, given that Hannies have no fingers.

Though most Hannies do not wear clothes, Suzuki can always be seen in a dress shirt. It is not clear how necessary such a wardrobe choice is for a Hanny, but it seems to add an air of respectability to him (until he opens his mouth).

Rance may encounter Suzuki shortly after the start of his investigation into the Four Witches of Kathtom incident by visiting the Pub. Asking for information around town will usually produce some commentary on the current state of things from the citizens. Asking Suzuki for information, however, produces exclusively absurd comments, such as "the sun rose from the North," or "a radish in a pickle press becomes a carrot." Suzuki sometimes seems to know things outside of The Continent, like proclaiming "The Berlin Wall fell," which mystifies Rance. Eventually the option to interact with Suzuki disappears, implying that no amount of player interaction can force Rance to deal with Suzuki ever again. 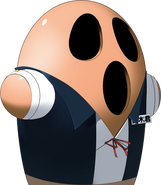