Suteroku is one of the three optional mercenaries that can be recruited in the Sengoku Rance spin-off game Three for the Slash! Thrust! Burn!. He is a sketchy highwayman of dubious ability, and costs 800 GOLD to hire. Once hired, he will remain in the party until he is killed in battle.

Suteroku has the same general appearance as the "Ruffian" enemy type encountered throughout the game, being a scrawny man in tattered clothing with a shaved head. He differentiates himself from his enemy counterparts by sporting an eye patch across his left eye, a trait entirely unique to him.

Described by his profile as a "Shifty Bodyguard", Suteroku comes off as an untrustworthy character. He is very confident in his abilities and especially prides himself for his speed, so much so that he refers to himself as "Suteroku the Gale". Despite this, he is also said to be "always the first to flee", suggesting that he is quite cowardly and quick to run when the situation is not in his favor.

Despite working as a mercenary, Suteroku is not at all a skilled fighter. He is statistically weak in all areas with the exception of speed, where he scores quite high. Even his great speed is rendered underwhelming when opposite two of his employers, Suzume and Kentou Kanami, who are respectively a highly skilled elite Ninja and a ninja known for her excellent speed.

In combat, Suteroku wields a small pencil knife. He does not appear to have any training wielding it, and seems to wildly attack his opponents without form. All of his attacks are somewhat comical, as he aims for strange parts of the body with them, such as the nails, ears and armpits, none of which deal particularly effective damage. 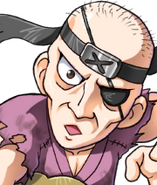 Suteroku's portrait in Three for the Slash! Thrust! Burn! 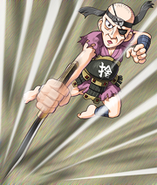 Suteroku's battle portrait in Three for the Slash! Thrust! Burn!