Snake Lady is a Monster that belongs to the class of Gal Monsters, infamous for their nasty personalities. They're self-centered and individualistic, with a prideful and eggocentric behavior that largerly disregards others opinions or feelings. Proof of their wickedness, one of the most brutal and sadistic Dark Lords Medusa was one of these prior to her transformation.

They have the appearance of a young and curvaceous woman with a long and curvy purple hair. They often either wear very little clothing to cover their genitals or none at all. They have long-pointed ears somewhat similar to that of a Kalar. They're sometimes seen carrying a golden orb as well, using this orb to restore their energy and stamina in combat.

One of their most notable traits is the heinous snake that accompannies them at all times. Snake Ladies are born with this lethal snake, wrapping around their body and controlling it at will as if it was an extra limb. They have absolute control over their snake companion, using it for many purposes on their daily life from hunting, fighting, or simply resting on. They fight by using their snake as a lethal weapon, relying on savage physical attacks to take down their foes. Their snakes can inflict dangerous poisons capable of either weakening their enemies or paralyzing their movements. They can also employ supportive magic to boost their defenses, making them quite sturdy enemies.

Like stated early they boast a domineering demeanor, enjoying to toy with those weaker and themselves. They're sadistic and lewd creatures that find great joy in playing with their victims, especially inexperienced and naive individuals. They sometimes also resort to a seductive and inviting conduct when trying to charm others, using their attractive and alluring looks to draw males. Their imperious personality makes them Gal Monsters difficult to capture and/or tamed, as they hate to follow orders from others and prefer to subdue others instead. Some especific species of monsters highly regard them as "Queens", devoting themselves as their servants and even trading their lives to her to boost her strength, furtherly showcasing their dominant behavior. Despite all these traits however, Snake Ladies become surprisingly vulnerable and weak-minded when overpowered or during situations they can't handle, changing into a far more nervous and agitated creatures that show little of their previous majesty. 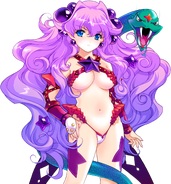 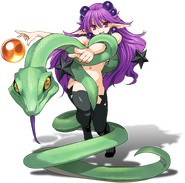 Snake Lady in battle in Rance 01. 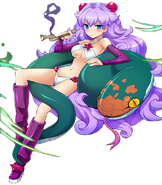 Snake Lady's appearance in Widenyo.
Add a photo to this gallery
Retrieved from "https://alicesoft.fandom.com/wiki/Snake_Lady?oldid=112008"
Community content is available under CC-BY-SA unless otherwise noted.