Slasher is a commentator working for Toushin Digest, the premiere program for post-battle updates on the Toushin Tournament. He is frequently seen working alongside Kuri, but the two do not get along, Slasher being constantly frustrated with Kuri's unprofessionalism. Despite, the two have been seen spending time together outside of the tournament, Slasher griping all the way. Ultimately, the two need one another: Kuri is far more popular by far, but Slasher is the only reason any reporting actually gets done.

While Slasher is known for carrying one or more knives with him at all times, he rarely uses them. 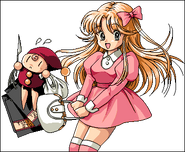 Slasher's portrait from Toushin Toshi GIRLS GIFT.
Add a photo to this gallery
Retrieved from "https://alicesoft.fandom.com/wiki/Slasher?oldid=112602"
Community content is available under CC-BY-SA unless otherwise noted.