Sioux Province was a normal girl that went missing in the Forest of the Lost in the Free Cities Alliance. She was found by the Rapu, a species of friendly monsters that resembles fairies. She was raised by them and lived in the village since then. She's very protective towards the village.

When Rance was being attacked by Dark Lord Satella, they were teleported into the Rapu Village. The party tried to confront them by fighting Isis but they were unable to win, the Rapu fought her off and the elder told Sioux to escape with Rance. She joined his group since then and Rance taught her about many things of the world and the humans.

When they returned to the Rapu Village they found out that it was wiped out by Satella. She's very depressed for this and when Barres Province hears about Sioux's story, he decided to adopt her.

She later willingly took part in the events of the war. She's a strong fighter, proficient with an axe and was capable of fighting in the Helman-Leazas war.

It is revealed that she was incorporated into the Leazas Black Corps since she was last seen.

Sioux is a very simple and humble girl. She's often enthusiastic and full of energy, always ready to fight or help. She's relied on her skills to survive in the Forest of the Lost. The Rapu raised her and thought her how to talk and fight, but she doesn't know much about the world or human's society. She's very curious about things she doesn't know about.

When someone shows certain proficiency in something she's quickly impressed and praises others. This was seen when Kanami could perform assassinations on various soldiers and Sioux was amazed at her skill, looking up to Kanami and praising her. She also started calling her "Kanami onee-chan" (which made the ninja happy) and seems to refer that way to every female she looks up.

She has developed an affectionate bond with her newly adoptive father Barres. She admires her new father and has grown close to him, and also shown interest in meeting her new elder sister Hauren. She has also showed great concern for him, like when he was depressed that his strategy failed because he wanted to look cool in front of Hauren, she sweetly comforted him. They've also been shown protective each other in the battlefield.

By the epilogue she seems to have met Hauren and they exchanged a positive meeting. 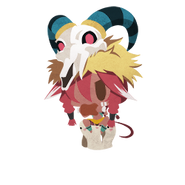 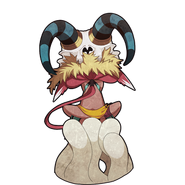 Su in dungeons in Rance 03.

Sioux in a formal attire.