AliceSoftWiki
Register
Don't have an account?
Sign In
Advertisement
in: Articles with No Spoilers, Articles needing a Quote, Characters,
and 4 more

Shuri Seihajuu Nagasaki, usually merely addressed as Shuri, is the cheerful and friendly receptionist of the Coliseum where the Toushin Toshi Tournament is hosted. She's a recurring character within the Toushin Toshi Series, making appearance in every game including the DMM game and the 3DS all ages remake of the second game. She often supports the main character as one of the few people to cheer for him through the tournament. In Shinyaku Toushin Toshi she's also used as the mascot of the game, both in the official twitter and in the DMM community page.

In the games she introduces the Toushin Toshi Tournament and serves as the main informative with things related to the matches and the organization of the competition. In the original Toushin Toshi, she also co-hosted the Tournament Digest Magic Vision show along with Kuri, recapping the day's fighting events, but she was replaced by Slasher on the latter games. She also presents the winner of each round with his or her prizes, as well as the occasional confetti shower. She and Copandon Dott host the 22 Toushi Toushi Tournament in Rance X: Part 2.

Shuri is an attractive young woman with a short green hair and blue eyes. She's an average sized woman, with a combination of a girly and youthful appearance and a mature adult body. Her figure is feminine and curvaceous, boasting relatively large hips and breasts. Her outfits have changed over time, but she usually dresses with modesty and reservedness. Her attire often consists of a sleeveless uniform, sometimes wearing gloves, and her clothing tends to be white and blue colored. On her most recent appearances, she's changed to wear a short blue shirt, and wearing either purple or white thigh-highs. Due to her job a receptionist, she's almost always seen with a pen and a notepad.

Her personality is cheerful, amiable and very pleasant. She likes steamed pork buns but is often worried about gaining weight. She does her job with diligence and responsibility, though she's not above expressing her fatigue or personal irritations even to complete strangers. She often keeps high spirits and makes sure to do her job as efficiently as possible. She tries to remain neutral with the participants of the tournament and doesn't openly support anyone, but on private she will express her support to those she likes and cheerfully congratulates them after their victory with great joy. She's Obviously because her positions prohibits her from granting any meaningful assistance to the competitors, her support is only emotional. She's courteous but distances herself from formalities, offering her service with an easy-going yet well-mannered disposition. She's quite perceptive and more clever than she appears to be however. Aside form her job as a receptionist, she also handles a store to sell simple merchandise usually to spectators, though she's frequently seen pushing those she converses with to buy her goods.

She's an honest and somewhat unblushing person, with a slightly flirty behavior sometimes. When a competitor she supports comes out victorious of a match, she immediately receives him after the battle with a modest celebration, granting him or her the earned prizes. She's also seen encouraging the victors with having sex with the partners of the rivals, as the rules of the tournament allows them to do whatever the please with them besides harming them, and she often likes to tease those that are more naive and innocent. Despite her lack of prudishness, she herself has actually remained a chaste for most of the games (with the exception of the third installment), and she's single. She's fairly popular with men due to her attractive looks and her lively personality, but she's not someone easy to seduce as she won't accept someone she doesn't love and she's yet to truly fall for someone. For some strange reason, Puchi Hannies are inherently attracted to her, and such Hannies have been seen having powerful crushes for her both in Toushin Toshi 2 and Toushin Toshi 3, much to her dismay. 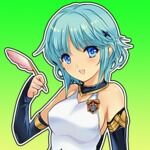