The main character of AmbivalenZ who is also known as the cursed knight. Before being cursed he served the kingdom of Saeruuna as the 5th strongest of 17 knights. His job was to protect the princess since her birth.

This ultimately went wrong and Deirdre came to be who summoned a dragon who was cursed with immortality, upon slaying it he got covered in its blood and suffered the same curse. He turned Albino in the process and now only lives for revenge.

After roaming the world, slaying Duendy and thwarting their plans, he ultimately settles for a time in the town atop the Lid of the Kettle of Hell where he meets the then 15 year old Ky of the time, Shou Ky. They travel together to do more of the same and at the start of the game he is still doing just that, but Shou Ky only seals them now.

He is an accomplished swordfighter who uses the negative Kusanagi and air magic to fight. He has also gotten quite knowledgeable when it comes to Duendy and uses this knowledge to combat them. His years of living through horrible events leave him cold and uncaring. 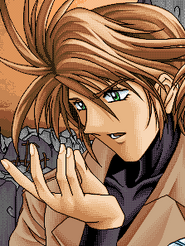