Shimazu Yoshihisa was the cool-headed eldest of the four Shimazu brothers and the ruler of Shimazu House in the country of JAPAN.

Bordering the mercantilist Free City of Portugal, the Shimazu territories enjoyed a booming economy, allowing them to thrive even as JAPAN was torn apart by civil war. Additionally, all four of the Shimazu brothers, the most recent members of the territories' ruling family, possessed exceptional abilities that made them each excellent leaders, further ensuring that their nation would exist as a paradise. Because of this luxurious lifestyle, the four brothers were able to idle away their days chasing women without fear of conflict.

As the Shimazu family had charged itself with the protection of Kurohime, the immortal daughter of the Dark Lord Xavier, across several generations, Yoshihisa and his brothers were raised to value her own safety above their own. Each brother developed powerful romantic feelings for the demon princess as a result of this upbringing, causing them to often compete amongst each other over who would get to marry her.

During the events of Sengoku Rance, Yoshihisa and his brothers were approached by the Dark Lord Xavier some time after his initial defeat at the hands of Oda House's forces during the Honnouji Temple Incident, who demanded that they submit all of their armies to him. While the four were initially completely opposed to assisting Xavier, their inability to conventionally damage him forced them to agree to his demands, making Shimazu's forces become the foundation of the Demon Army in the process. Despite submitting themselves to the Dark Lord, the siblings made multiple attempts at rising up against him to take back their land but were eventually forced to stop after Xavier threatened to take Kurohime's life if they continued to do so.

Eventually, the four brothers became cornered by Oda's forces during battle, forcing Yoshihisa to charge into the enemy base camp on his own in order to buy his younger siblings time to escape. Leaving leadership of Shimazu in the hands of his younger brother Shimazu Kazuhisa, Yoshihisa consumed a rare drug that greatly enhanced his physical abilities at the cost of reducing his mind into that of a mindless beast, intending to sacrifice his own life in order to save the lives his brothers. Unfortunately, Yoshihisa's efforts proved to be futile, as Rance and his allies were able to successfully fight off his attacks and kill him.

On additional playthroughs, Shimazu House is able to declare war on Oda without having the Demon Army take control over its territory, with the four brothers deeming Rance to be their enemy due to his poor treatment of women. The four prove to be highly dangerous foes, and are able to win the allegiances of Mouri House, Tanegashima House and Takuga through charm alone, as well as seduce any female commanders within Oda who aren't already in love with Rance into joining their side. After having one of his female subordinates stolen by Shimazu, an enraged Rance gains the option of sending Suzume into their territory to capture Kurohime, causing the four brothers to surrender themselves to Oda in order to ensure her safety, allowing them to be recruited as playable commanders in the process. When recruited, Yoshihisa will develop feelings for Mouri Teru if she is also a part of Oda's forces, and will eventually propose to her, which, depending on whether or not Rance had successfully raised her affection for him beforehand, she will either accept or decline.

Yoshihisa was a handsome man in his late twenties who possessed short, slightly curly black hair, a light muscular build, and tan skin. His clothing consisted of a shirt made of fine purple silk covered with extravagant-looking platinum armor and white pants. He was never seen without a cigarette in his mouth, which further contributed to his confident image.

Like his brothers, Yoshihisa was extremely popular with women and spent much of his free time seducing as many as he possibly could. He possessed a naturally calm, collected and charismatic personality and was often described as being "cool" and "mature" by his female admirers as a result. As the ruler of Shimazu's territories, however, Yoshihisa was required to take his duties significantly more seriously than his three brothers were, causing him to frequently forgo philandering in order to focus on ensuring that their land would remain prosperous. He was an exceptionally talented leader who approached all problems with cool-headed confidence that allowed him to see the best possible solution to them, regardless of how dire the situation was. Despite generally maintaining a carefree and somewhat flippant attitude, Yoshihisa cared deeply for the safety of his country, to the point of sacrificing his own life without any sort of hesitation in an attempt to liberate his people from Xavier's control.

Yoshihisa was very close to his three younger brothers. As the oldest sibling, he was given the final say in all decisions the four siblings made, which he would often take advantage of in order to be able to sleep with certain women before his younger brothers were. Despite this, he was generally perfectly fine with treating them each as his equals during most occasions and always consulted them before making major decisions. In turn, Yoshihisa was highly revered by his younger siblings, who always addressed him respectfully and followed his orders. Yoshihisa's love for his brothers was so great that it ultimately resulted in his death, as he gave his life holding off Oda's forces in order to allow them time to escape.

While he was very fond of all women, Yoshihisa was deeply in love with Kurohime, the immortal princess who was taken in by the Shimazu family generations in the past. As Kurohime acted as a second mother to Yoshihisa as a child, however, she was unable to ever see him as anything more than a boy even after he had grown into an adult, much to his frustration. Kurohime was Yoshihisa's biggest weakness, causing him to surrender himself to enemy forces whenever her safety was threatened by them.

During his time in Oda on additional playthroughs, Yoshihisa develops strong feelings for Mouri Teru, the oldest daughter of the Mouri family. The two share a large number of similarities with each other due to being the oldest and most responsible members of their respective families. Yoshihisa would often take Teru out for long romantic walks in the moonlight, where they would spend hours simply enjoying each others company. Eventually, Yoshihisa will propose to Teru, which she will either accept, becoming his wife, or decline. If Teru rejects Yoshihisa's proposal, he will become crushed, showing that he truly valued her as a person rather than as a simple fling, though he will respect her decision to do so. Notably, Teru will also fall in love with Yoshihisa if Mouri house is still active when Shimazu declares war on Oda, making her the only one of the Shimazu's potential lovers who can fall for him even without them being recruited into Oda's forces.

Described as an excellent man, Yoshihisa was a highly skilled and versatile warrior. He possessed a high Level Cap of 49, which he was close to reaching, making him stronger than a large percentage of The Continent's population, as well as an unshakable resolve that allowed him to stand against any enemy. In combat, Yoshihisa wielded a katana sword with a considerable amount of proficiency. His fighting style was a perfect balance of both offense and defense, allowing him to both efficiently attack his enemies and defend his allies.

Beyond his individual abilities, Yoshihisa was a talented leader both in and out of combat who could lead a large army with excellent results while also successfully maintaining a thriving economy within his territories.

Outside of combat, Yoshihisa possessed excellent sexual technique and was able to swiftly and decisively determine the weak points of any woman he was with regardless of their personality or body type. When all four brothers worked together on a single woman, their combined skill was enough to drive a woman to the brink of madness with pleasure. 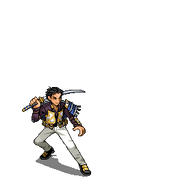 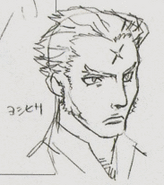 Concept artwork of Yoshihisa from the Sengoku Rance Guide Book.