Shibata is one of the major generals serving under Oda Nobunaga of the Oda House. He's a very lousy and friendly man. He speaks very loudly and at the top of his lungs, laughing and joking all the time. Despite this he's still very polite and absolutely loyal to his lord, putting his life on the line for him regardless how hopeless the situation seems. When most retainers deserted the Oda House in its decline, Shibata was among the few loyal ones remaining.

Shibata's most iconic trait is his status as a lolicon, which isn't actually true. He's well known by everyone for being a lolicon due to how much he loves little girls, being very protective, observing them from distances and even considers little girls beautiful in their way, often talking about the beauty they have. He loves Kouhime dearly, who he considers an amazingly pretty girl, but his greatest love is Shinobu, who he considers perfect and it was laying his eyes on her what led Shibata to become so obsessed with little girls. These things make him look, for good reasons, a lolicon but he wouldn't even think about the idea of having sex with a kid, claiming that little girls are supposed to be admired for their cuteness rather than for pleasure.

Through speaking with his fellow general Ranmaru, Rance can learn that she harbors feelings for him but this is like an impossible love for her. He seems to be attracted to her to some extent, as he gets flustered after accidentally seeing her naked, but he continues to claim to find her body unattractive.

By character clearing her, Ranmaru manages to marry Shibata by adopting a little girl between the two to be their daughter.

In the non-canon Kichikuou Rance, Shibata was pretty much an entirely different character, being their loyalty to their lord the only resemblance they share. He was proud, loved to battle, lustful and sexist with women, arrogant and overall an obnoxious and petty man. He likes to fight, and was irritated when Nobunaga sent him to negotiate a treaty with Leazas, but was killed during the war with them.

With a cap of 46 and a lv2 spear combat skill katsuie was a powerful warrior. Though his true strength lies in his defensive capabilities and endurance which is further increased by his lv1 Guard skill he is able to take a lot of damage before going down. 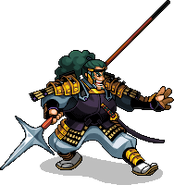 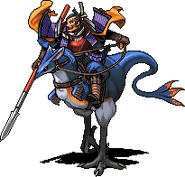