AliceSoftWiki
Register
Don't have an account?
Sign In
Advertisement
in: Articles with No Spoilers, Free Cities Alliance, Zeth, Male characters

The Shamo Brothers are a trio of sentient rice paddles that have chosen to abandon their lives as cooking utensils to live as citizens on The Continent.

Originally hailing from the Free City of Red, a purported "Mecca for rice paddles", the Shamo brothers steadily grew weary of stirring rice day in and day out until they decided to give up the trade to go out into the world and pursue their dreams. It is unclear if all rice paddles within the Continent possess this level of self-awareness or if the three brothers have been given life through Magical means.

Each of the Shamo brothers is a rice paddle with a small set of arms and legs emerging from their sides and a simplistic face with a prominent nose, lips, and laugh lines on their head. They are described as both acting and sounding similar to elderly men, implying them to be fairly old. The brothers seem to share a perverted disposition between them, and proudly display life-sized cutouts of beautiful women in various states of undress in their businesses. These cutouts tend to draw attention away from the brothers themselves and have led to many misunderstandings with the perverted adventurer Rance, who routinely confuses them for being actual living people.

Shamo Jiniichiro (しゃも仁一郎, shamo jiniichirō) is the eldest of the Shamo brothers and the owner of a weapon and armor shop named Shamoji's in the Free City of L'Zile.

Having fulfilled his lifelong dream of owning an item shop, Jiniichiro is a whimsical and high-spirited individual who always greets his customers with vigor and enthusiasm. He claims that every weapon carried by his store was purchased with all of his heart and soul, emphatically stating that he will never be used to stir anything ever again. Beneath his lighthearted personality, Jiniichiro possesses a surprisingly strong and principled core and will not offer his services to those he believes will use his wares to bring harm to innocents.

Jinichiiro is a devoted fan of Alice Tenmabachi, a popular idol from the Free City of The-O. His most prized possession is a life-sized promotional cutout in her likeness that he displays prominently in his shop and will ferociously guard from those who attempt to steal it. Jiniichiro had initially intended to set up his store in The-O to be close to Alice, but eventually settled on locating it in L'Zile due to having relatives that lived in the area.

During the events of Rance 03, L'Zile was occupied by a division of the Helman Army as part of Prince Patton Helman's campaign to conquer the Kingdom of Leazas and the Free Cities. Refusing to do business with those who would do harm to the people of L'Zile, Jiniichiro removed all signage from his shop and closed its doors to the Helman Army. While he remained in the city throughout the occupation, he made sure to contact his brothers to assist him in escaping to safety in the event that his store was raided during the conflict. Kanra was eventually freed from its occupants as a result of the efforts of the emerging Leazas Liberation Army, allowing Jiniichiro to resume his work.

Sometime after the Helman Army was driven out of Leazas, Jiniichiro attended one of the concerts in Alice Tenmabachi's Free Cities Restoration charity tour, where he excitedly cheered her on from the sidelines.

While Jiniichiro's role is largely the same in the original release of Rance III as it is in its remake, his store is located in the city of Kanra rather than L'Zile. His interest in Alice Tenmabachi is also entirely absent, with his most prized possession instead being a poster of an anonymous red-haired woman undressing.

Shamo Jiro (しゃも次郎, shamo jirō) is the second-oldest of the Shamo brothers and the owner of an unnamed shop in the Zethan city of Italia's second-class district.

Jiro appears to have a somewhat more terse and professional personality when compared to his older brother, offering no asides about his personal life to customers and keeping conversation that does not involve making purchases to a minimum. Despite this, he is still suggested to be very perverted, as he displays a life-sized cutout of a woman changing in his store.

The store that Jiro runs is unique in that it trades goods in exchange for red coupons carried by certain strong Monsters rather than GOLD. In spite of its lack of conventional currency and location within one of the notoriously impoverished second-class districts of Zeth, Jiro's shop does not appear to be struggling financially and sells several rare and powerful items such as armor buns and weapon eggs.

During the events of Rance VI, Jiro's shop can be visited by Rance while exploring Italia. After at first mistaking his cutout for an actual woman interested in having sex with him, Rance expresses frustration that Jiro is instead a strange old man but agrees to do business with him. Jiro's shop can be visited by Rance throughout the game and can eventually be accessed directly from Rance's headquarters without the need to first travel to Italia.

Shamo Jisaburo (しゃも治三郎, shamo jisaburō) is the youngest of the Shamo brothers. He is the only one among the three to have not made a physical appearance in the Rance Series, leaving both his profession and place of residence a mystery. Jiniichiro notably does not mention that Jisaburo owns a store like he does with Jiro when discussing the two in his appearance in Rance 03, possibly suggesting that he chose to pursue a different career path from his brothers. 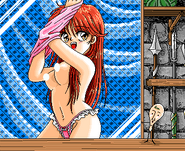 Concept artwork of Jiniichiro from the Alicesoft blog.