Seydes was the former pope of the Church of Eve, and later the leader of the Outlaw conspiracy known as the Snake Crest during both of its two major incarnations. Having translated new sections of the Evenicle, Seydes broke his faith with Mother Eve and began to plan for a secret coup against the rest of humanity. Little is known about Seydes' life prior to these events. After the Arthur Tragedy, Seydes went into hiding, and began to rebuild the Snake Crest for his second offensive.

Seydes' ultimate plan involved two stages: to undo Mother Eve's grasp on the world (especially in the form of her blessing), and to attain the power of both Mother Eve and of the Archfiend Adan to destroy the world and so destroy Eve's legacy. To this end, he used the techniques Snake Crest had used to refine Adan's Blood on his own administrators, creating pure strains of six major human desires, which he then absorbed into his own body through a system of machines and pipes. He himself became an embodiment of wrath against Mother Eve.

While Seydes was able to temporarily succeed at his first goal, and also gathered the power of Mother Eve, both with the unwitting help of Princess Croix of Eden. The second phase of his plan was also close to completion when he was defated by Asterisk and his family, despite transforming into his newly-assumed power. Weakened, Seydes' power was drained by Prince Felton of Central, who took it to the Archfiend's Right Arm. There, Seydes manifested as a new being, the Wrathful Shadow, which Aster also defeated.

During the days of Aster's adventure, Seydes had become a withered and hateful old man, already changed by the process of absorbing others' desires. He is never seen without his snake-themed throne and its contingent machinary, even in his human form as the Wrathful Shadow.

Seydes was once fantatical in his worship of Mother Eve, but this zeal turned to wrath after he learned more and more of the truth about Eve and the Archfiend Adan. Unwilling to support Eve's world any longer, he delighted in turning the members of the Snake Crest against one another, not only to create the desire and other circumstances he requried, but quite possibly out of sheer glee. His love of suffering was what ultimately led him to attack Aster and his family at all, when he otherwise could have hidden behind a force field he had prepared for his own protection.

Once transformed, Seydes' jaw was said to have unhinged like a snake's to reveal his new form within: a four-armed being with a skull for a face, spikes prodtruding from the body, and huge pustules along its back.

As former pope of the Church of Eve, Seydes can be presumed to have a thorough understanding of religious matters, one only enhanced (to his misfortune) by his translation of the Evenicle. His administrative and manulation abilities have only been refined by his time in Snake Crest, having organized not just one but two conspiracies against the rest of the world, both of which nearly succeeded. As royalty after a fashion, Seydes may have similar, knight-like powers to other members of nobility in the World of Eve, but this has not been confirmed.

Once transformed, Seydes gained an unparalleled physical power, but was ultimately undone by his reliance on wrath, something Aster could quell with his fighting techniques. It is unclear how far Seydes' powers would have evolved if he had survived any further after gaining the power of Eve and the Archfiend, but he had hoped it would allow him to destroy the world.

As the Wrathful Shadow, Seydes was able to repel anyone who was guilty of that particular desire. 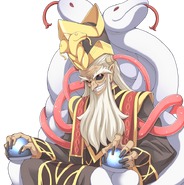 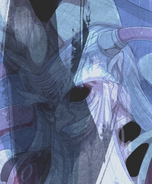 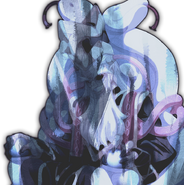 The Wrathful Shadow's portrait from Evenicle. 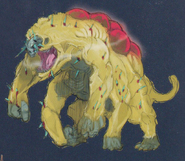 Seydes transformed into a monster of wrath.
Add a photo to this gallery

Retrieved from "https://alicesoft.fandom.com/wiki/Seydes?oldid=102562"
Community content is available under CC-BY-SA unless otherwise noted.