Senpuuji Kyouko is a widowed, single mother. During the events of Big Bang Age, after Wolf Fang has gained control of the Toukyou district, she is given orders from Idagawa Ren to capture a woman who is wanted by the NPI. While Kyouko does proceed to fight against Wolf Fang, she chooses to ignore her orders to capture the woman.

After Wolf Fang has taken control of the Tiyoda district, Rouga can meet up with Kyouko. She tells Rouga she has fallen out with Gokuren and asks if she can join Wolf Fang so that she can 'pay back' Idagawa Ren, as she 'owes' him. In reality, Kyouko wishes to kill Ren, as she holds him responsible for the death of Hokuto, her late husband. She does not inform Rouga of this.

After Rouga has defeated Idagawa Ren and captured him, Kyouko goes to the prison where he is kept and kills him with a knife in order to complete her revenge. Ren's corpse is then discovered later by members of Wolf Fang, who are unaware that Kyouko is the one that murdered him.

During the National Chapter, Senpuuji Yuuna, Kyouko's elementary school aged daughter, demands to join Wolf Fang to fight alongside them, which Kyouko vehemently disallows as she believes Yuuna does not understand what she is doing and could quickly die in battle. However, Rouga convinces Kyouko to allow Yuuna to join, in exchange for keeping Yuuna alive. If Yuuna does end up dying in combat, Kyouko will leave Wolf Fang.

Kyouko is a fairly powerful long-range fighter. She attacks using a set of three fans which she throws in a straight line at her opponent.

Her special ability is 'Enemy Counter -', which reduces the likelihood that enemies continue attacking if they have been hit by an opponent using a longer range attack.

Kyouko is a young woman with a fairly abrasive personality. She doesn't seem to open up to anyone, not even her daughter. Kyouko very much loved and relied on her late husband, Senpuuji Hokuto, who died three years prior to the events of Big Bang Age while fighting for Gokuren. Kyouko deems Idagawa Ren, leader of Gokuren and a man Hokuto considered a friend, responsible for his death. Because of this she is filled with hatred for for Ren and wants to kill him to avenge her late husband. After doing so, however, she has difficulty coming to terms with it.

Kyouko cares for her daughter, but acts a rather strict mother in order for Yuuna to grow up as a strong, independent woman. Despite this, she shows a gentle and loving side to her daughter as well, as can be seen in her ending and conversation events.

Kyouko has green eyes and orange, somewhat uneven, shoulder-length hair. She wears a red ribbon and a small mask of a demon in her hair as accessories. She wears a black skirt that reaches down to her ankles with a matching black crop top that has a red ribbon in the front. Around her waist she also wears a red cloth that's tied in the front. Above her crop top she wears bandages that reduces her cleavage. Kyouko also wears a short-sleeved blue jacket with two white ropes tied in a knot around her shoulders. Underneath her jacket she wears white sleeves. Parts of a pair of red gloves can also be seen. Around her neck she wears a blue choker adorned with a small gold pendant.

Some of Kyouko's battle sprites in Big Bang Age.

Some of Kyouko's battle sprites in Big Bang Age. 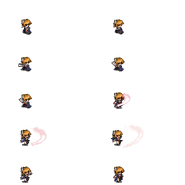