Sel Catchgolf, also Sel Curchgolf, is a priestess of the AL Church living in the town of Red of the Free Cities Alliance. Extremely devoted and with an unquestionable faith, Sel is a person that deeply believes in the doctrine of the church and truly dedicates her life for the well-being of others. She's a very faithful believer of the church and believes that God ALICE is a gentle spirit that wishes nothing but her children's happiness.

She has helped Rance in some of his adventure, as even though she thinks of him as a cruel and malicious man who has strayed from virtue, as he is usually fighting evil she believes that he must have some noble intentions deep within and that he could become a great hero if only he were guided back to a more righteous path. As such she's always trying to change him into a better person though it has been so far to no avail as Rance has never shown much in the way of repentance, and he doesn't believe or care about the preachings of the Church.

Between the events of Rance IV and Rance VI, she acted as the keeper of the demon sword Chaos as she has heard the tales of it corrupting its wielders if they are weak-minded people and binding them to his will. As such she considers that only a pure hero or a saint can resist its influence and safely wield it. Of course this is proven inaccurate time and time again by Rance, as he has shown absolutely no evidence of being controlled by Chaos at any time, as the two of them are kindred spirits and so Rance wields the blade despite her admonitions.

Due to the fact that the AL Church prohibits acts of self-indulgence such as drinking alcohol or fornicating, which Sel strictly follows with no complaints, Rance was never able to convince her to have consensual sex with her, at least while she's sober. Despite this, she's noted for being particularly liked by Chaos, who likes naives and virgin girls like the priestess the most, and she's been molested by him a few times, further cementing her opinion that the sword is too dangerous. However, Rance has managed to have anal sex with her by getting her drunk a few times without her noticing, though her hymen is still untouched.

Sel is very serious and dedicated to her job, and she would never even consider going against the rules of the Church (unless it was an extreme situation, like a Dark Lord invasion).

She's very popular with the kids and the elders of the town. Despite her serious nature she's also an extremely gentle and pure individual. She would never tell a lie or do something for her own benefit, being naturally dedicated to others and willing to listen to their problems and offer her help. Unfortunately, she's extremely naive as well, often believing in what anyone says, regardless if they are thieves or rapists, and she sometimes ends in itchy situations because of this. She would often try to turn a delinquent into a better person, with her most important (and futile) goal being to change Rance into a better person. She also tried to do the same to Milli Yorks, who she considers just as bad as Rance. While she's naturally innocent and pure, she's still pretty assertive and very firm in her stance. She's very stubborn and is really hard to convince her to do anything that she didn't have the initiative to do.

While she's a gentle spirit with no ill-will, her convictions are unshakable and her devotion leads her to act very strictly according to the Church's teachings. She's incredibly serious when it comes to the pursue of the Undead or users of Death Magic for example, since the AL Church deems them as terrible blasphemies that must purged no matter what, which Sel actively believes as true.

The one stance where she shows constant hesitation is on the subject of Chaos: as its lecherous attitude and evil reputation has convinced her that it is too dangerous to ever be used, she has often thought to get rid of it for good, and the only reason that she never quite managed it is the fact that it is one of the only swords in the world capable humanity's greatest threat, the Dark Lords. Still, this only serves to prove how rigid her stance can be, as she considers putting the world in terrible danger if it means sealing an evil artifact for good.

As a standard for a priestess she has a Lv1 skill in Divine Magic, giving her very good healing and purification skills. She's actually incredibly skilled at the art, being capable of casting high-level spells like Recovery Rain to a great effect, immensely healing everyone in her party. Her skills for Healing spells is highly valued while adventuring or in other such situations where battles are frequent and consecutive. She can cast most healing spells with great efficiency and is also adept with some offensive Light spells like Purify, an ability created exclusively for the destruction of Undead with obscenely good results, but deals next to no damage on conventional targets. Of course, since Sel holds little intention of harming others, she wouldn't use it offensively against anything but Undead even if it could.

Her current level is 37 and has a cap of 44, making her extremely skilled in the art and a boon to almost any adventuring party, but as she preaches peace and non-violence, the instances where she will fight are few and far between, and she will only do so in extreme situations. It is unknown how she keeps her level so high, but she certainly doesn't fail to keep it up and is always ready to assist in emergencies. 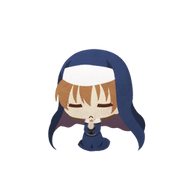 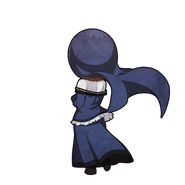 Sel's back for Dungeons in Rance 03.

Sel's appearance in the Harem Master Trading Card Game.
Add a photo to this gallery