Shikibu (式部) is one of Xavier's five apostles. Her true name is Seiryuu (青龍). A scantily clad female Apostle, other than her urge for killing and blood-shed, she is near emotionless. She's very silent all the time and only shows a slight bit of emotion after killing. She has a huge gold claw-like glove in her right arm, and she carries a blue twisted sword on her left hand. The cutting edge of these two items are extremely sharp and capable of scattering large amounts of blood.

Originally, Shikibu was a regular human, but was accidentally abandoned in a mountain at a very young age. Thinking her dead, her parents never searched for her, but when she was 6 the Dark Lord Xavier was surprised of finding a feral child covered in the blood of several creatures and surviving on her own in the dangerous mountain filled with Youkai and Monsters. Seeing great potential in her, he took her back with him and turned her into an Apostle. While at first she wasn't as enthusiastic over the thought of killing people, she grew accustomed and very fond of it to the point she could quickly performed massacres with an ecstatic expression. Eventually, along with Xavier and the other Apostles, she was defeated and sealed.

In LP0004, she remained sealed within a monk of the Tenshi Sect, and breaks free when encouraged by Rengoku during the revival of Xavier in the 4th Sengoku Era. She is present during the raid on Honnouji Temple and is defeated by the Oda House, but she manages to escape before Rance can have sex with her.

She later fights against Ogawa Kentarou, who she nearly kills, but is stopped and killed by Kurusu Miki after the latter accidentally nukes the area with a Kiechae Bomb, killing her in the process. She never had the chance to show her true form, as she was killed instantly by Kurusu Miki. Since Shikibu is a pretty powerful sword fighter, it can be presumed that she would have been an imposing opponent, but she would have been killed by Miki regardless of it anyway. 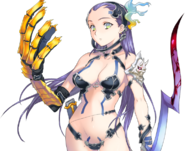