Sanada Tourin was one of Takeda's four great Generals, being probably the most intelligent of the four and the one that serves as a voice of reason to the inflammable advisers.

He got along well with his comrades, with who he cooperates with to make Takeda Shingen the ultimate leader for the Takeda House, however, they were defeated by the Oda House during the events of Sengoku Rance. He was the only survivor of the advisors after the crushing defeat Takeda faced in this battle, and joined Rance and the Oda House in an attempt to unify JAPAN and make the best for the country. Following what he perceived as a great failure on his part, he assisted Princess Kou for a period of time, but later moved to the Free Cities to see more of The Continent. He later traveled to Helman, where he joined the Helman Revolutionary Army to assist them after he heard they were having trouble breaching the enemy base in Rance IX.

He's well-known for being an incredible tactician and a very skilled archer, being both, a smart and rational advisor in the political affairs, and an excellent commander in the battlefield itself.

He is a middle aged man with short white hair and a thin black moustache who always sports a serious expression. He wears traditional light JAPANese armor that is colored mostly blue. In Rance IX, he now sports a scar over his right eye, which he covers with a wing shaped monocle. While he looks like a pretty old man, he's actually only 43 years old.

Tourin is a very calmed man, incredibly composed and serious. He works in cooperation with his companions for an ideal future for the people, being completely devoted to them. He believes that it is their mission to do everything in their power to bring the best to the regular people of the country, even sacrificing his own honor. He's a man of integrity and selflessness, being willing to withstand any shame with pride for the sake of the populace. It is thanks to this that he survived the events of Sengoku Rance, where the other three main members of the Takeda House wanted to fight their last battle and die an honorable death, he chose to not go to the battlefield to survive with indignity just to be able to join the Oda House and work for the sake of the JAPANese the best he can.

He's also a man with a deep admiration towards honesty and dependability, and actually has an incredible amount of respect and admiration for Rance due to his encouragement of Rance's selfish goals, which Tourin actually admires due to the honesty it would take to admit to them. He recognizes him as an incredibly competent man and thinks highly of him regardless of his flaws. Rance also seems to tolerate him particularly well compared to most men, probably because he gets along fairly well with those that don't try to go against his wishes, and Tourin is a very reliable ally, although he would still prefer having a woman as his ally over Tourin any day.

Oddly, Tourin seems to be particularly fond of strange people with weird personality traits, Rance himself being a good example. He also gets along pretty well with children or playful individuals, such as Athena 2.0, who he established a casual friendship with prior to the events of Rance IX.

Befitting one of the four main Generals of the Takeda House, Tourin is a remarkable master of war. He's an incredibly smart man, capable of architecting several strategies by using several unconventional factors at his own advantage. While he only has a Strategy Lv1 skill, his gifted intellect has led many to make the claim that he's JAPAN's greatest tactician, a title that is certainly most likely true. His skill in the art of war is so great even capable and notorious tacticians like Cream Ganoblade admire his talents. His greatest talent is his trademark Fuurinkazan, a tactical skill that wildly changes the outcome of a battle, granting several key advantages to his side to the point that even their very morale is boosted.

Aside from his amazing tactical skills, Tourin is also a more than adept archer, boasting a Bow Combat Lv1 skill. He's a very precise sharpshooter, using a bow and arrow with sublime accuracy and power. However, his physical abilities are not quite as impressive, and he's very vulnerable in direct combat. He's a very immobile fighter, with little agility or evasive skills, relying on keeping the distances and leading his allies towards victory. He still carries an impressive Level Cap of 55, with his current level being 45. His skills as a tactician and as an adviser are so highly valued, Miracle Tou considered him an option for her theoretical elite team of the Twelve Knights, as it's brains no less. 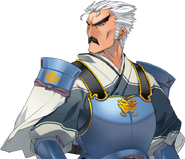 Concept artwork of Tourin from Hanihon 8.
Add a photo to this gallery