AliceSoftWiki
Register
Don't have an account?
Sign In
Advertisement
in: Articles with Minor Spoilers, Characters, Female characters,
and 7 more

Ryouma is the leader of the Takuga group in JAPAN, founded in the cursed land of Shikoku, a territory in the southwest of JAPAN that is plagued with Hell Holes and Onis constantly ravaging the land. Unwantedhumans, criminals, cursed and mutated are sent to the death land and locked with a huge gate away from the rest of JAPAN. Ryouma is a human that was cursed by a Youkai when she was still on her mother's womb.

While pregnant with Ryouma, Ryouma's mother was cursed by the yokai Namename, resulting in Ryouma being born as a hermaphrodite. With her mother dying while birth and her father ignoring her, Ryouma's condition caused her to become the target of savage abuse for the town people. Ryouma was chased from her hometown and raped by a group of men. When she returned home her father coldly ignored her. She ended up developing an intense hate for humans and the following day grabbed a katana and slaughtered her abusers. This led her to being chased down and eventually ended up in the Death Country, where she met Yuzuru, Mine and Gon.

Wishing to escape a life where they are constantly plagued by onis attacks, Ryouma gathers everyone who can fight (more or less everyone), and hatches a plan to take the neighboring Middle Country (Nakakkuni) and foundering the small nation of Takuga.

While she managed to escape the Death Country and form an alliance with the Mouri House, the Takuga House was later defeated by Rance in his conquest of JAPAN, and later joined the Oda House along with her friends. She later assisted Rance to get rid of Motonari's curse to defeat him and the Mouri House.

Ryouma is a very tomboyish and tough looking girl. She wears a skirt and is quite feminine in appearance. She's usually optimist and relaxed but it's one to easily get mad and pick if a fight in disagreements. She tends to argue a lot with Yuzuru over the most trivial things but they are also very close and friendly with each other. She's not the type that likes to follow orders and rules, the only one that can boss her around is Mine, who has a fearful side.

She hates to be looked down and underestimated by others and is always very independent and self-sufficient. However, her curse is a vulnerable and soft spot of hers that upsets her a lot. During fighting, the bloodshed and rush of the battlefield sexually arouses her, something that she doesn't like at all. Since she's a hermaphrodite, either Yuzuru and Mine would sleep with her after fights in order to assuage her. She hates it because she feels she's forcing her friends to something they don't want to and blames her curse for it. Both don't mind it though and claim that she shouldn't feel bad about it. She's pretty sensitive and upset with her curse and hates to feel mocked for it. She was incredibly enraged when Motonari Mouri sarcastically joked about her state, to the point that she started scheming to kill him when she got the chance. Despite this, she's not shy or uncomfortable about her body. When Rance called her a girl she shamelessly showed him her penis to prove him wrong(although he still called Ryouma a girl regardless).

She loves and cares deeply for her friends from Shikoku and holds a particularly close relationship with Gon, who's almost like a father to her and is very protective with Ryouma. She's very worried about him because he's cursed and is slowly losing the ability to speak and communicate. She's willing to do anything to help him unlift his curse but Gon prefers to stay like that in order to have the strength to protect Ryouma.

She's a natural leader, being able to assemble everyone in Shikoku and form a nation and also leading during the Oni assaults to prevent as many casualties as possible. She also hates humans because they threw the undesired and broken in the cursed land, completely disregarding their humanity and rights. She didn't want to live in human's society and seeked nothing but a peaceful place safe from the oni where she could have a quiet life with her friends, who she considers her family. This mentality changes a bit after Rance defeats the Takuga House and she joins his army. After JAPAN is unified she was able to find her way and compared brutish and cruel humans with the Oni.

Ryouma is an excelent fighter that has the skills of a ninja and fights primarily with a katana. She's been in the Death Country of Shikoku since a relatively young age and has spent several years fighting Oni in a daily basis in order to survive. The people in Shikoku are known for being particularly strong for the way they are forced to live in the cursed land. She has a high cap of 40 and skills in sword combat and as a ninja.

Humans that are cursed by a Youkai have the advantage of being stronger than regular humans, with enhanced speed and strength. She also has an inhuman endurance and tolerance to pain as a result of her curse, being able to withstand the torture and sexual abuse of several oni for hours and remaining mentally stable. Usually humans die very quickly due to the brutish nature of the oni, much less an entire group.

Outside of her fighting performance she's an excellent leader that could put together all the remnants in Shikoku and establish a nation under her lead. Considering most of these are former criminals and physiologically unstable people, she's got some amazing skills to be able to control them and organize them in a group. They also show great loyalty to the nation she founded. She's also been leading the group in the oni assaults and prevented many casualties in the past, which might be the reason why many of the residents of Shikoku trust her abilities. She's an excelent tactician as well, being able to come up with eloquent and efficient strategies on the spot and think several steps ahead. Motonari Mouri admired and flattered her tactical skills. 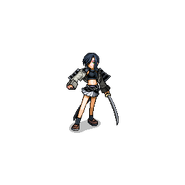 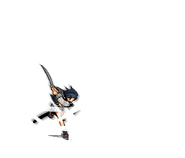 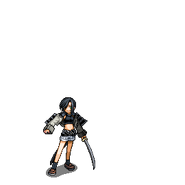