Saias Crown is the general of the Fire Army of the magic nation of Zeth.

A member of the Crown family, one of the oldest and most powerful noble households in all of Zeth, Saias had the opportunity to live a life of pleasure that was free of struggle or hardship, a rare luxury in the constantly chaotic world that is The Continent. Despite this, Saias became disgusted with the pampered and excessive lifestyles of the elite in contrast to the suffering of the lower class at a very young age, and took careful efforts to distance himself from his relatives.

While attending one of Zeth's most prestigious magical academies in his youth, Saias found himself to be highly talented in the Magic Arts, and enlisted in the Zeth military immediately after graduating. Despite being perfectly capable of instantly attaining a high position within the army through his family's name alone, Saias chose to begin his career as a common soldier in order prove that it was talent, not blood, that made an ideal mage. Saias' extraordinary skill with magic allowed for him to quickly rise through the ranks, and he successfully attained the rank of general of the Fire Army after only a year.

As one of Zeth's four generals, Saias remained one of the most steadfast supporters of King Ragnarokarc Super Gandhi and his egalitarian policies. While other influential figures within Zeth began to turn their backs on King Gandhi, forming their own conservative group in direct opposition to him, Saias, along with the other generals, continued to believe in his ideals in hope that Zeth would one day achieve true equality.

During the events of Rance VI, Saias and his colleague Uspira Shintou were called to intercept the forces of the non-magic user rights group Ice Flame's Green Corps, who were assaulting the tower of Papaya Server, one of the Four Lords of Zeth. While the pair came close to defeating the group, Saias, worrying for Uspira's safety, forced the two of them to retreat after she began to succumb to the wounds she had sustained earlier while fending off a monster attack, allowing the Green Corps to escape with their lives.

Following the invasion of the monster army led by the Dark Lord Camilla after the deactivation of the nation's primary defense system the Maginot Line, Saias and the Fire Army held off the monster forces at Adam Stronghold at the country's eastern border long enough for the citizens of Zeth to successfully evacuate the country and take shelter in and around the fortress. After the evacuation, Saias, alongside fellow general Kabachahn the Lightning, patrolled the evacuee camps in order to defend it from monster attacks. During this time, Saias briefly met with Rance, who had saved Uspira from being killed by a group of monsters earlier, in order to give him a set of magic-boosting items as thanks for saving her. When Camilla had been successfully defeated and the monster forces successfully eradicated, Saias resumed his regular duties as a general and attempted to propose to Uspira, who rejected him, claiming that she would only consider it after Alex Valse had gotten married.

Saias is briefly mentioned by Alex during the Light Army's failed battle with the Dark Lord Kite in Rance Quest, where the young general worries that the Fire Army will lose its foothold on Adam Stronghold should Kite reach them.

In the non-canon Kichikuou Rance, Saias and his colleagues are tasked with defending Zeth when the kingdom of Leazas, led by the newly crowned King Rance, begins invading it. Saias' fate varies depending on which direction Zeth is invaded from. If Leazas attacks Zeth through the Fire Army's base in Adam Stronghold, Saias will kill himself by detonating a magic grenade in a last ditch effort to stop them, expressing regret that he could never admit his feelings for Uspira. If Leazas invades Zeth through the pathway opened up through Shangri-La, bypassing Adam Stronghold in the process, Saias and the Fire Army will appear after the Ice Army is defeated at its base in Italia, when Rance attempts to rape its leader Uspira. Saias will admit his feelings for Uspira and challenge Rance to a duel in order to protect her. If Saias is successfully defeated during this duel, he will activate a magic grenade in order to blow himself up to give Uspira a chance to escape, which she will refuse to do, choosing to instead die alongside him, causing the two to be annihilated in the explosion in each other's embrace.

Saias is a tall young man with a lean and muscular build and a face with soft, handsome features. Like all members of the Crown family, he has distinct red hair, which he keeps in a short, wavy style. His clothing consists of the standard Zeth military uniform with the addition of a large red cape denoting him as the general of the Fire Army. His design is slightly different in Kichikuou Rance, as his hair is much longer, reaching down to his waste, and is a pinkish color.

A flashy playboy with a sharp tongue and a sarcastic wit, Saias is well known throughout Zeth for always speaking his mind, even in the face of his superiors. He is very vocal about his distaste for Zeth's nobility and makes no attempts at hiding his contempt for the more corrupt and controlling members of the government. He is also exceedingly cocky and self-assured, and will break out into fits of laughter whenever someone attempts to challenge him, and admits that he finds combat boring when he has no one to show off in front of. Additionally, he has a reputation as a serial womanizer, and has dated countless women throughout his career, with all of his relationships ending with his then-current girlfriend breaking up with him due to his constant flirting with other women. At his core, however, Saias is a noble and kindhearted person who joined the Zeth Army exclusively to protect the weak, and he is highly respected and admired by his friends and colleagues as a result. His love for his country surpasses his own will to live, and he will gladly sacrifice himself in order to ensure Zeth's safety.

During more private moments, Saias reveals a much more contemplative and self-deprecating side, showing that his normal persona is to some degree an act that he puts on for the amusement of others. In these instances, he admits that he considers himself to be a coward who tries to cover his insecurities and fears with false bravado.

Saias is extraordinarily close with the other three generals of Zeth, to a point where he considers them to be more of a family than he does his own relatives. In particular, he holds deep feelings for the Ice general Uspira Shintou, who he has admired from the moment he met her. Despite his usual confidence around women, Saias is incapable of admitting his feelings to Uspira, as he believes that he will never be able to fully fill the void in her heart left by her deceased husband. Saias finally managed to muster the courage to confess to Uspira after the reactivation of the Maginot Line, but was rejected, with Uspira making the excuse that she wanted Alex to get married before her. In spite of this, Saias has not given up his pursuit of her and the two remain close, and Uspira continues to visit his flower garden whenever she has free time.

Besides his relationship with Uspira, Saias is also best friends with Alex Valse, the general of Zeth's Light Army. The two are extremely close, and possess a deep brotherly bond that allows them to speak to each other frankly about personal topics. Alex frequently urges Saias to be more upfront with his feelings towards Uspira, and expresses exasperation with his constantly rotating love life. In return, Saias often teases Alex about his relationship with Magic the Gandhi, and urges him to do the same with her. Despite his teasing, Saias carries a large amount of love and trust in Alex, and continues to hope that he will someday become the king of Zeth, showing that he believes his friend has the potential to lead the country to greatness.

Recognized as one of the most powerful magic users in Zeth, Saias is an excellent mage who possesses a balanced combination of both skill and power. He has a high Level Cap of 41, giving him a great amount of potential, and a natural talent for magic. His raw magical power is so high that he is able to deal substantially more damage than even other individuals with the same skill level are able to, allowing him to be a dangerous opponent against even high leveled foes. Additionally, he is much more physically formidable than the average mage, and is able to shrug off several powerful attacks before falling.

While his magical abilities are incredibly high across the board, Saias particularly excels in fire magic, to the point of being considered to be one of the most powerful fire mages in the world. His skill with fire magic is evident from his ability to cast Fire Blast, a high level fire spell, after charging his energy for only one turn, in comparison to most other mages requiring at least two. He is one of the only people alive capable of casting Zetton, the most powerful fire spell in existence, allowing him to cause a devastating amounts of damage that few people are capable of withstanding across a wide area of effect. Beyond his own abilities, he carries several grenades filled with magical energy with him at all times, allowing him to utilize the effects of the spell Fire Blast without having to charge at all.

Besides his excellent physical abilities, Saias is also a very skilled military leader who was able to achieve the rank of general solely through his own talent. His Fire Army is entrusted with guarding the Adam Stronghold, which protects Zeth's eastern border, making it the nation's primary line of defense against Human invasion, showing how much trust is placed in his capability as a general. His skills as a leader are illustrated during the mass evacuation of Zeth during the monster army invasion, where he was able to instantly mobilize his troops on very short notice to assist in fighting off the attackers.

Outside of combat, Saias is a talented gardener who maintains a gigantic and incredibly well-maintained garden on the roof of his estate filled with several diverse species of plants. The beauty of his garden has been noted by all who have seen it, and it remains a popular gathering place among the four generals of Zeth. While many people write off his gardening hobby as a mere ploy to attract women, Saias' love for flowers is genuine, and his most well-kept secret is his dream to breed his own species of them. 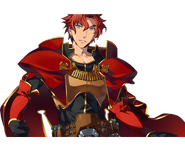 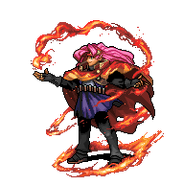