Rugiewit is one of the three Ancient Elders serving Deirdre. He has a very long chin and a bit of beard. While generally humanoid-looking, he has a huge hump on his back and his left foot is about half the length of his right leg. His left arm is so long that he seems to use it to support his weight instead of his left leg. He wields a Khakkhara in his right hand, which he uses effectively to fend off projectile attacks. He can also create an illusionary copy of himself to confuse his enemies, but it can be distinguished by incorrect shadows.

He was assigned by Deirdre to assist Fenrir, and guarded the path out of the First Exhibition Hall of the Art Gallery, where he was slain by Shura. His death triggers a transformation of the space around him, melding the door and the wall together and blocking the way. 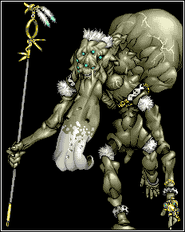