Ruberan Tser is a member of the "patrolling units" in Helman. She takes her duties as a guard incredibly seriously, and is a very diligent girl. She takes great pride in her role, despite being only a minor platoon that serves as police, she takes it as her responsibility to protect the citizens and capture bandits.

She despises outlaws and criminals, since they only trouble the already suffering populace of Helman, and looks up individuals of integrity and virtue. She greatly admires the General of the 1st Army Lelyukov Berkov, who she tries to offer her support whenever she can.

She was born in a poor household and her parents were incapable of sustaining Ruberan and her little sister Merim, so she decided to join the military to provide for her family. However, her support was insufficient and her sister Merim Tser was eventually sold to the Golch family. Merim is the young archaeologist that accompanied the Helman exploration platoon in Ylapu in Rance IV. Ruberan blames herself for Merim's fate and she dreams with re-encountering with her sister someday.

Her first appearance took place in the non-canon Kichikuou Rance. She's the reason why Rance's thieves group was captured and Rance had to flee to Leazas. It is in this game, if the player recruits Merim, that it's explained that Merim and her are sisters.

She appears for the first time in the canonical timeline in Rance Quest during Rance's mission at Lion Mind, Alkaneze's thieves group's headquarters at the time. Rance claims that he met Ruberan once and she gave him a hard time, to the point he gets pissed off only by looking at her.

In Rance IX she tries to arrest Rance for crimes he committed the last time he was in Helman, most of them involving rape, but she's defeated by the Team of Outlaws of the Revolutionary Army and was raped by Rance.

In Rance X, she aids in the defense of Helman and finally reunites with her sister. She and Merim will be killed if Babolat is not defeated in time.

Despite being only the captain of a patrolling unit that serves as a local police, Ruberan is very skilled as a commander. She has a Sword Combat Lv1 skill and an above average Level Cap of 30, with 25 being her current level. Despite lacking the skillset, she's surprisingly competent as a leader, being capable of commanding her unit with great skill to the point of cornering Rance's group that had highly skilled combatants like Patton Misnarge, Hubert Lipton, Shizuka Masou, among others like Rance himself, and they required the assistance of Rick Addison and Tillday Sharp in order to come out victorious.

In addition, she also boasts an unpresented Game Lv1 skill, which grants her a high ability for playing a wide variety of games with versatility. She's noted for being very skilled at chess, which probably speaks of her tactical and commanding skills. She herself is also notable for her firm resolution and force of will, and doesn't give up easily. 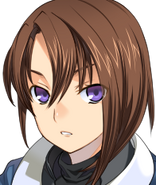