Rosé Card is a priestess of the AL Church from the town of Kathtom. Despite her status, she isn't a devote follower of the church's doctrine at all, lacking the slightest motivation or interest to actively work as a priestess. She inherited her church after her parents perished during the incident with the Four Witches of Kathtom, who ventured into the Witches Maze and never returned. She does not believe in the religion the slightest, and only sees it as nothing but a great tool for making money. She loves leisure, GOLD and fornication, things that are strictly forbidden in excess by the AL Church.

She makes her first appearance in Rance 02, where she assisted Rance and Sill by healing them whenever they visited their church. Rance tried to convince her for sex and she agreed, but she was so disinterested in the idea that Rance lost interest almost immediately. Eventually Rance found out about her secret fetish of copulating with Devils when he accidentally found her having sex with one. He complained that she could have asked him for sex instead, but she stated that normal humans could no longer sastify her.

She appears again in Rance 03, where Rance finds her in a town near Ice because Kathtom is being attacked by Helman at the time. He tells her how he can't get pass the Devil's Passage because of a certain Devil that is blocking his way, and she assists him by telling him how to enslave a Devil by learning their true name. She also lends him her Devil slave Da Gale, who helps him learn the Devil's real name and cross the Devil's Passage.

She also gets a brief cameo in Rance VI, where Rance was informed by Abert that there was a "naughty nun" in the Haniwa Plains. When encountered by Rance, he quickly ran away from the scene of Rose fornicating with a devil.

An incredibly alluring and erotic young girl, Rosé is noted for being attractive. She boasts a beautiful golden hair, a slim figure and a slinky expression. She wears her priestess robe right on top of her underwear, but when she's not actively preaching for the AL Church, she mostly keeps it shamelessly open and exposing her underwear in a seductive fashion. In her earliest appearances, she was portrayed as more difident and uninspired, but she was later shown a lot more friendly and somewhat flirtly. While she doesn't care about her job and mostly works as a priestess for personal benefit, she's not a bad woman whose only really negative traits are her selfishness and greed for money. She often uses money for her own pleasure with no remorse or care, but she's perfectly willing to aid and assist anyone who needs her help.

Her favourite hobby is to fornicate with Devils, something that is completely against the AL Church since Devils are considered impure and wicked creatures that need to purged, as they are the epitome of the anti-gods. Furthermore, indulling oneself in sexual pleasure is usually considered a sinful act, and is largely prohibited by the church's doctrine. Rosé however doesn't care the slightest about it, and secretly spends her time with Devils she made pacts with or that work under her. While she becomes the master of the Devils she enslaves upon learning their names, Rosé is completely submissive during sex, allowing her Devil slave to toy with her as much as he wants while she drowns in pleasure. She's extremely lascivious, extremely probably an understatement. The amount of pleasure she gets from copulating with Devils is incomparable, probably making her the most lustful person in The Continent, surpassing even someone like Rance. She loves sex with Devils more than anything, often going into excited speeches about the pleasure she gets when given the chance. She dreams with having sex with a high-ranked Devil named Lucifer, who she claims that will doubtlessly kill her in the process due to him being an extremely powerful entity, but that the pleasure would be so great that dying for it would be worth it. This further proves how insane her sexual desire is.

Outside of her carnal side, she's mostly a carefree, lazy and loose woman. She's completely shameless as well, considering she doesn't have a problem with walking in plain daylight with her underwear exposed, and openly selling herself to others with a jovial expressions.

While the way her actions she directly contradicts the AL Church's doctrine, Rosé is nonetheless a skilled priestess with a naturally high affinity for Divine Magic. Even though she's largely uninterested and unmotivated with her role and finds the idea of healing others free of charge bothersome, her skill for healing magic is good enough to heal a party of adventurers to full despite the fact that Rosé barely puts any effort into it. While her Skill Levels are unknown, the healing spells she casts are able to do a perfectly fine job despite the fact that she doesn't even bother to chant the spells, suggesting that her skill towards the Art is rather high.

Aside from her abilities as a Priestess, she's also very knowledgeables with Devils, knowing far more than the average person and being well-informed about the rules of their society. She was the one that explained Rance that a devil would have to swear loyalty to someone who knew their real name, and she even seems to know about important members of their hierarchy that don't ever venture in the mortal realm. She's also absurdly experienced with sex since she regularly has incredibly intense sexual sessions with Devils as a daily routine, to the point that she claims that she's more or less incapable of feeling anything from a regular human penis. She claims that sex with humans is boring and lousy when compared to Devils, and doesn't have interesting in copulating with humans anymore, unless it's in exchange of money. 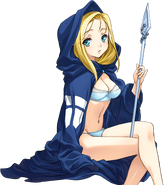 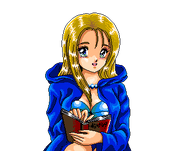 Rosé in the original Rance III.