Rola Indus is a normal girl from the town of Ice in the free cities alliance. She's selfish, loudly, obnoxious, and hates to follow orders. She is the daughter of Jingle Takashi Indus.

Under unclear circumstances, she somehow met with the Lis Round One named Wuu. They both became close, and despite the vast differences between the two, they fell in love with each other and decided to ran away together, since they knew her parents wouldn't accept their relationship, hiding in the Lis Cave to the north of Ice.

Her father asked a petition to the Keith Guild to rescue his daughter, thinking she was kidnapped by a monster, mission that ended up being accepted by a money starving Rance. When Rance got to their location, Wuu tried to protect her and they engaged in a battle in which Rance came out victorious, raping her as "reward for rescuing her", much to Rola's anger. Even worse, she thought that Rance had killed Wu, who was kicked out after the encounter, and when they returned to the keith guild she heard about the holy sword and armour and decided to steal them, hiding the pieces Rance was desperately needing and running away.

When Rance managed to find her she told him that she wouldn't return it because she's mad at Rance for killing Wuu. Later on, Rance decided to disguise a random kid as Wuu and presents him to Rola, who falls completely for the trick and returns the holy items, leaving with the fake Wu and having sex with him in the toilet.

During the epilogue, Rola is seen reunited with the real Wuu in Wrench's store. After he had an encounter with Rance and mutating into a human body. She's angry with Rance but Wuu calms her down by telling her that it all ended well for both. 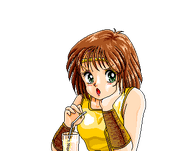 Rola in the original Rance III. 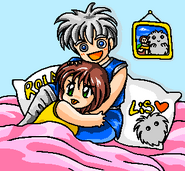